Voting will be done in accordance with Article X, Section 10 of The Gambia National Olympic Committee Constitution.

The winner of 27 November 2021 election will replace current President Dodou ‘Capi’ Joof, who is not expected to seek re-election. 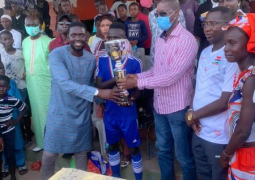 Real De Banjul will brawl with Tallinding United in the opening match of the 2020-2021 Gambia Football Federation (GFF) division one league today, Friday at the club’s academy field in Basori at 4.p.m.