As Muslims continue to observe the Holy Month of Ramadan, Noor Aid UK, a registered charity based in Manchester with the primary objectives of helping the poor and needy in Africa and Asia has donated over 7000 bags of rice, sugar, onions among other items to thousands of households across the country.

The donated items, which manifests the charity’s culture of caring and sharing, according to officials are worth over five million dalasis.

Noor Aid UK has now become a household name in the country with many describing it as the leading humanitarian association in the country due to its support to needy community.

In an exclusive interview with The Point, Hashim Bharucha, chairman of Noor Aid explained that among its objectives is to ensure that communities in their intervention countries are supported.

“We want to put smile in the faces of all needy people in our intervention countries.”

Mr Bharucha explained that his charity was founded in 2001 when he visited The Gambia on a vacation, adding that the charity started with small food distribution in the country.

With the support of good philanthropists in the UK, US and Bangkok, the association is now growing bigger and better and is annually supporting vulnerable communities in the Gambia, Guinea Bissau, Senegal, Yemen, Lebanon and the Rohinga refugees in Bangladesh.

“So far during this year Ramadan, we have distributed over 6000 Iftar food packs across the country. We extended similar gestures to Senegal and Guinea Bissau and each pack includes rice, sugar, cooking oil, dates, candles, tea bags and onions.”

He indicated that his association also cooks and distributes over 300 hot meal packs every day to needy households to break their fast.

“In the last fifteen days of each Ramadan, we slaughter four goats every day and distribute it to needy people. Over the years, Noor Aid has built 22 masjids in The Gambia, sponsored many Quranic memorization schools and madrassa.”

Ousman Jammeh, the country coordinator of Noor Aid UK spoke at length on the significance of helping Muslims especially during the Holy month of Ramadan.

In this year's Ramadan, he added, the association has bought about 7000 bags of rice in order to help needy families across the country.

“As we speak, plans are in the pipeline to buy more than five hundred bags of rice which will be distributed to other needy Muslims across the length and breadth of the country.”

He revealed that the association started in the community of Wellingara by helping them with potable drinking water. “The inhabitants of the area used to encounter lots of difficulties in terms of accessing clean water. However, thanks to the intervention of my partner the issues of water shortage in the area become the things of the past.”

“We then decided to expand our intervention into other important areas by starting with a donation of 50 to 150 bags of rice to Mosques around the area. At the moment, a lot of students both in the English and Arabic schools are benefitting from the association scholarship packages,” he stated, adding “We are currently supporting about 14 Arabic schools with feeding.

The association, he further explained, doesn’t only limit its intervention by giving out food items and helping villages with water, but they also engage in other sectors ranging from health among others.

“The association has also in the past supported some patients who couldn’t afford to pay their hospitals bills. We also help build compounds for people who were either seriously hit with windstorm or floods. Last year, we bought about 700 packets of corrugates to affected families in order for them to roof their houses.” 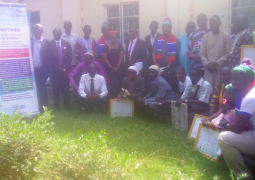 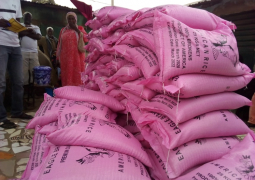