With support from the USAID and the American Bar Association, the Judiciary of The Gambia on Monday converged to review and validate the draft report on court connected Alternative Dispute Resolution (ADR) rules at the Sir Dawda Kairaba Jawara International Conference Centre in Bijilo. 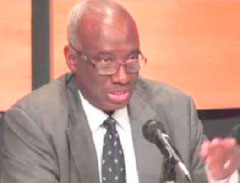 With this report coming into effect, it is expected that access to speedy justice will be enhanced, as cases less necessary and which can be solved otherwise may be settled out of courts by mediation.

Gracing the events were top government officials, judges and magistrates, members of the Bar, civil servants, members of civil society organisations and other key stakeholders.

Addressing the gathering, Chief Justice Hassan B. Jallow, said: "The revival and improvement of court connected ADR rules is an important element of the strategic plan of the Judiciary, which is meant to improve the efficiency of the courts."

"Hence, the need and the urgency for reviving the court connected ADR rules in order to provide an avenue for dealing with those categories of cases. That is very important because it will enable the court to focus on what needs to be resolved judicially and by the courts themselves, and hence, expedite the process of delivering justice," he added.

The Chief Justice concluded by commending the committee that has worked on the draft for a job well done.

The Judicial Secretary Ida Drammeh, also noted that ADR method is not an underdog to other dispute resolution methods, adding all of them have strength and attractions.

She commended Chief Justice Jallow for his visionary leadership and support and also commended the partners who supported the initiative.

Hon. Fatoumatta Njai, alias Touma Njai, the National Assembly Member (NAM) for Banjul South, and the mover of the motion: ‘Constitutional Amendment Bill 2021’ has vowed to continue her advocacy until the Women, Youth and Physical Challenged Persons have their voices heard in the country.