This followed the announcement of the closure of the prosecution case by the state counsel, A.M. Yusuf.

Counsel Sissoho stated that he was making a no-case submission on behalf of the accused under Section 7 (d) of the constitution and Section 166 of the Criminal Procedure Code. He said that by the bill of indictment dated 20th July, 2019, the accused is charged with a single count of murder contrary to Section 187 of the Criminal Code.

He noted that the particulars of offence indicated that Koro Ceesay was beaten with a pestle-like object and other dangerous weapon. He added that the prosecution had called their witnesses and tendered three sets of documents, further stating that they also tendered a photocopy of an autopsy prepared by Dr. Oldfield. “This is the case of the prosecution in support of the charge of murder,” he told the court.

He was asked whether the prosecution had established a prima facie case against the accused to warrant him to open his defense. He submitted that there are two conditions in testing a prima facie case. “One is when there is no evidence to prove an essential element. Two, if the evidence is so weak and discredited,” he answered.

He added that the prosecution should prove the cause of death and that the accused is a murderer and the commission of the accused was unlawful. “From PW 1 to PW 6, there is no proof that Koro Ceesay is dead. PW 9 also testified that he saw Koro Ceesay a week before the 3rd June, 1995,” he told the court.

He argued that the scientific and the best conclusive proof of death is the autopsy report, adding that exhibits P3 and P3 (A) are the same autopsy report which was the photocopy and the original. He further stated that the said exhibits indicated that Koro Ceesay was presumed dead.

“No DNA test was carried out. No evidence was led by PW 9 that the remains were kept to do DNA test. Excluding PW 6, all the witnesses never saw the deceased with the accused. PW 2 and PW 3 confirmed that fact.  PW 9, who is a relative of the deceased, spoke highly of the accused. The evidence of PW 1, PW 2, PW 5, PW 7, PW 8 and PW 9 are not relevant and the witnesses wasted the time of the court. Their evidence has no value,” Counsel Sissoho submitted.

He argued that the second element of the case was to show that the act of the accused caused the death of Koro Ceesay. “No stick, no knife, no weapon was tendered before the court to connect the accused to the ownership of that weapon. They have to prove that there was a weapon used to kill Koro Ceesay. The best evidence is to determine whether the weapon was capable to harm the deceased,” he stated.

He noted that the evidence- in-chief of PW7, Chief Momodou Bojang, was very important. He argued that no evidence had been led to prove that the persons mentioned by Chief Momodou Bojang in his evidence are alive. “Dr. Badjan, the pathologist, only pinched from a record and not in detail. There is no deceased. In the absence of substantial evidence, the accused should be set free. Alagie Kanyi confirmed that between 8 p.m. upwards he was at Cape Point and was also at the residence of the accused. From 4 p.m. Friday 23rd June, 1995 till 1 a.m. and on Saturday PW 2, PW3 and PW 4 confirmed that they were in the residence of the accused at various times and the accused and his family were in his house,” Sissoho told the court.

He submitted that PW2, 3 and 4 gave inconsistent statements with that of Alagie Kanyi, adding that none of them saw Alagie Kanyi at the residence of the accused. He stated that PW 2, 3 and 4 placed the accused at State House in Banjul, further noting that the prosecution witnesses contradicted one another, and the doubt should be resolved in favour of the accused. “The evidence of murder is missing,” he said.

He said that Mr. Kanyi had lied to the court and there was no material evidence before the court, stating that there was no case to answer. He subsequently urged the court to acquit and discharge the accused.

The matter was adjourned to the 2nd June, 2020, for the prosecution to reply. 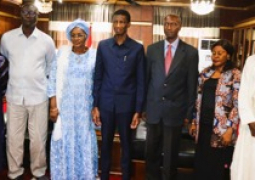 His Excellency Vice President Badara A. Joof on Tuesday October 18 received the board members of the National Nutrition Agency (NaNA) at his office in Banjul. 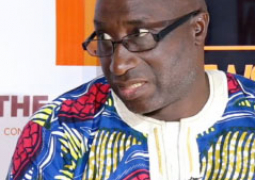