Speaking at the opening, Famara Darboe, the Child Fund’s country director, who doubles as the director of Sponsorship and Programmes recalled that about two years ago, Child Fund developed its country strategic plan called: “Destination 2020.”

In that plan, he said, they committed themselves to focus on advocacy as they wanted to make sure that their interventions investigate some of those advocacy issues that affect children.

“To carry out some form of assessments to inform what we are doing, we commissioned what we called The Community Based Child Protection Mechanisms  (CBCPM) and through this, we were able to identify in consultation with communities a lot of issues that children are faced with” he said.

According to Mr. Darboe, as an organisation and knowing that they cannot address all the issues at the same time, they had to work with the communities to do some form of prioritisation and during the prioritisation, they were able to do two validations because the issues brought to their attention were many.

He disclosed that Child Fund from last year decided to focus on child marriage as they are aware that there are laws banning child marriage in The Gambia, “but the implementation of that law is one thing that needs to be seriously looked into.”

“Our advocacy issue on child marriage is how do we work with different stakeholders to make sure that those laws that are put in place are implemented so that children will be protected with the issue around child marriage.”

He also stated that in West and Central Africa, it is indicated that in early April 2020, an estimated 128 million children were out of school as one of the collateral consequences of governments’ response to halt the spread of covid-19 pandemic as the figure for Africa in that same month was estimated at 262.5 million (approximately 21.5% of total population in Africa) children being out of school from pre primary to secondary school due to covid-19.

He added that from the economic impacts of covid-19 in 2020, Save The Children’s New Projections showed that as many as 391,000- 608,000 girls in Africa could be at risk of child marriage in the next five years and over half a million at risk of adolescent pregnancy in 2020 alone with the figure for West and Central Africa estimated to be 450,000 girls, in the next five years. 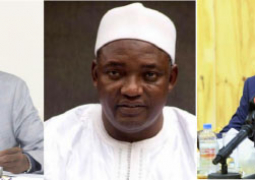 TRRC to submit  report on Thursday

Press release: Following consultations between the Attorney General and Minister of Justice, Hon Dawda A. Jallow, and the Chairman of the TRRC, Dr. Lamin J. Sise, the TRRC Commissioners will submit their final report to the President, H.E Adama Barrow at State House at 10am on Thursday, 25th November, 2021.