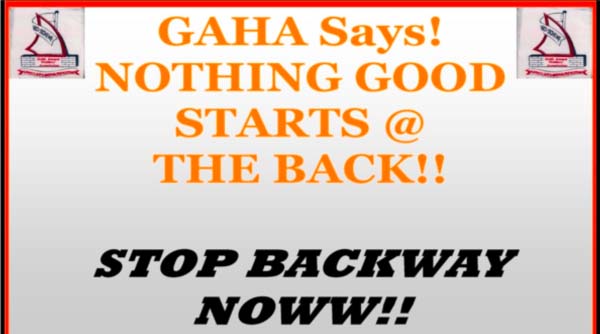 The National Youth Council (NYC) in collaboration with Gold Award Holders’ Association (GAHA) recently organised a forum on irregular migration to share the important records with the youths, and give the choices and alternatives to its members and other relevant stakeholders in the fight against irregular migration to Europe, including the issues and risks surrounding the journey.

The event was held at the President’s International Award Scheme (PIAS) offices in Bakau.

Speaking on the occasion, Lamin Darboe, Executive Director of the National Youth Council (NYC) pointed out that the role parents play in facilitating this journey for youths is crucial, and is alarming towards our economy.

Sending money for migrants are the sole causes of the depreciation of the Gambian dalasi, he said, while urging the youths to prioritize.

He also said that based on diplomatic ethics, the Gambia government does not have the right to influence embassies on the increasing visa problems for it citizens.

He made mention that many of those who have experienced the risked the journey of irregular migration are maltreated in detention centers, stayed in unhealthy environments, involvement in prostitution, and other issues that are against the humanitarian laws.

In relation to this, he gave references from media reports, documentaries and other relevant sources on issues of illegal migration.

Baboucarr Kebbeh, the chairperson of Gold Award Holders’ Association, gave a brief introduction of the association and highlighted on the purpose of the forum.

He said the aim of organizing the forum was to discuss the risk young people take using the backway, which is an irregular migration and the trouble parents go into in sending money to help sustained them during their journey.

“The quest to reach one million voices on irregular migration earlier called by National Youth Council triggered the Gold Award Holders’ Association (GAHA) to organize and mobilize more than fifty youths from award units in schools,” he said.

He said GAHA members and sister youth organizations to came together to discuss the issues on the high rate of the irregular migration of our Gambian youths to Europe, and that this was timely and prudent as the current statistics and situational analysis have shown over 8800 young people recently died in the Mediterranean Sea in their quest to achieve a dream (greener pastures).

He said the events should serve as a “Wake UP Call” to young people to turn around to see the opportunities that are available in the country, and look at ways to utilize them rather than venturing on what is commonly called the ‘’backway’’.

He said the records known to them show the majority of these youths taking this journey were from Africa, and The Gambia having the highest immigrants is a threat to our economy and the future of this country.

That was the reason NYC & GAHA held the forum to share these important records, and give the choices and alternatives on the issues surrounding the journey, he said.

Ousainou M. Jobe, programme officer of “Operation No Back Way” to Europe (ONBE) who deputized for his Executive Director and founding father of the organization, Babucarr Jabbi, deliberated on the factors that are the root causes of irregular migration.

He highlighted the significance of patriotism and determination, citing from other countries like Indonesia, Qatar, Malaysia and other countries that have rapidly developed in the past two decades.

He discouraged the mentality of willingness to succeed without measuring the risk factors, and thanked everyone for their participation.

He said the government and private sector should create more job opportunities and job centers, increase their salary scale and the motivation to stay in the country, and give youths the chances and opportunities to lead and make decisions on their own behalf.