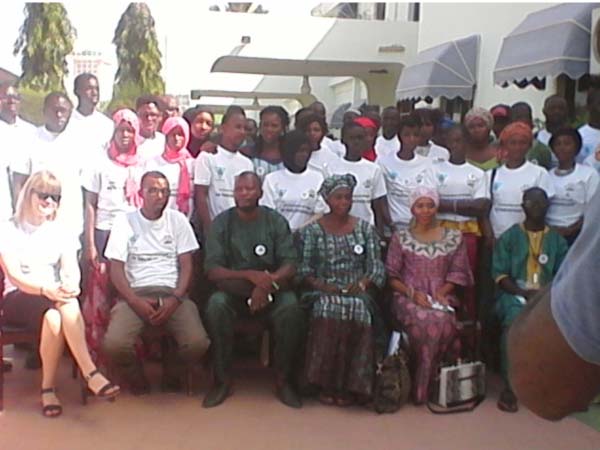 Safe Hands for Girls (SHFG), a non-profitable organization, in partnership with the Girl Generation, Friday held a daylong youth meeting on Female Genital Mutilation (FGM) at the Paradise Suites Hotel.

The meeting brought together young people, both male and female, as well as women rights groups involved in the fight against FGM.

Speaking at the meeting, FGM US-based Gambian activist Jaha Dukureh said it was an honour for her to always come back to The Gambia to join the young people in contributing to the fight against FGM.

She was glad that in the fight against FGM, they have got the support of the Gambian Government because she believes they could not fight FGM alone.

“It is good to have a Government representative to listen to them and to show them that they are with them,” she said.

Siaka Marong from the Women’s Bureau said that in their collective efforts to eliminate FGM, it is important for them to remember that women and girls continue to be victims of such violence across the continent and the world at large.

“This calls for concerted effort by all, so as to end an age-old tradition in a generation,” he said.

The Gambian Government had put in place different legislations that protect, promote and safeguard the rights of women and children in the country, he stated.

He said the approval and subsequent enactment of the Children’s Act, the Women’s Act, Domestic Violence Act, and the Sexual Offences Act by the Government came after years of sensitisation, raising awareness about the injustice meted out to women and children across the wider spectrum of the society.

Fatou Kinteh, National Programme Officer of the UNFPA, said it used to be a “taboo” to talk about FGM but due to sensitization campaigns, consultations and training conducted by GAMCOTRAP, NGOs and human rights organisations with support from the UN agencies, more people are becoming concerned and silence is being broken.

She said FGM/C had now become a household word being discussed openly in many forums.

There has been increased awareness on health and reproductive health complications as well as on human rights violations of FGM, which has led to communities making pronouncements to abandon the practice, she said.

She said the UN is committed to promoting and protecting human rights including the rights of young people, especially adolescent girls.

Dr Isatou Touray, CEO of GAMCOTRAP, said every society has its own tradition and culture and FGM is one of the many traditions that are deeply rooted in the Gambian society because of gender, class, caste, religion, social and economic boundaries.

Advocacy around FGM had created awareness in the people resulting in changes taking place in the communities, she said.

The GAMCOTRAP CEO further said that important strides had been made in addressing FGM in The Gambia, adding that they “are witnessing young people taking control through active stance towards the campaign against FGM”.

If elected I am going to reduce taxes, says Mamma Kandeh