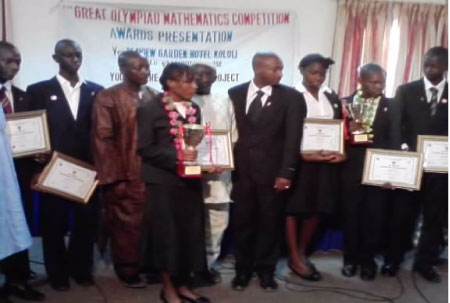 Organizers say the Great Olympiad Mathematics Competition (GOMC) serves as a forum to discover the participants to represent The Gambia in the Pan-African Mathematics Olympiad in in September 2012.

Aminata Jarju of emerged the first winner for the junior category and was presented with a championship cup, Skype Rainbow accounts and a certificate.

The second and third place winners were also given certificates and Skype Rainbow accounts.

In the senior category, Jemima Ifunanya Egbo of Ndow’s Comprehensive emerged first winner and was also presented with championship cup, Skype Rainbow account and a certificate.

Abubacarr Ceesay of and Jainaba Corr of were named the second and third place winners respectively.

He said they also organised the event to recognize the teachers and schools that inspired the students’ excellence.

He revealed that the event was proposed to hold in but has been referred to by the organizing committee.

The competition, he revealed, went through preliminary rounds and ended with final stages, between December 2011 and February 2012.

He added: “Most students enjoy the pursuit of excellence and seek opportunities to test themselves against their own accomplishments and those of their peers. Such an opportunity is best provided through properly conducted and equitable administered competitive activities.”

“Making connections among those skills and concepts both in mathematics and in other subjects is something students are expected to achieve both in the classroom setting and later in the workplace,” she noted.

According to her, the benefit of competition becomes evident when children who hesitate to participate in mathematical activities because of language barriers often willingly join in a game or competition.

Meanwhile, in a separate development, Baboucarr Manjang of St. Peter’s , Ebrima L.K Njie of the , Haddijatou Secka of and Hassan Sillah of were announced as qualifiers to represent The Gambia at the Pan-Africa Mathematics competition at the international showpiece in .