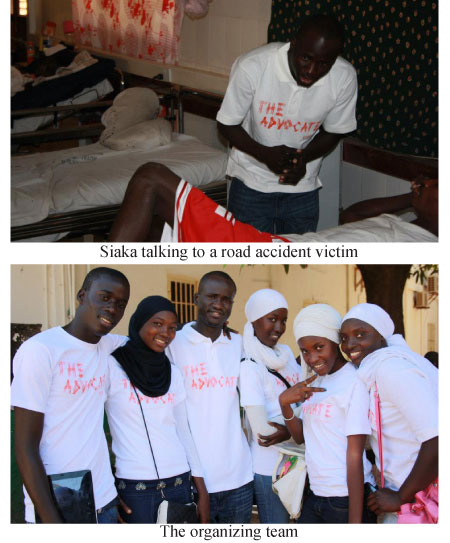 Siaka K. Dibba, a young social justice activist who says he has great passion for road safety, women and children’s rights issues, on 22 February 2013 marked his 25th birthday dedicating it to road safety.

According to him, a birthday is a day a person celebrates the anniversary of his or her birth, marking an addition to one’s age celebrated in the form of party and giving out gifts.

The activist dedicated his silver jubilee to road safety to raise public awareness on road crashes, which is the leading killer of young people globally.

He said more than 1000 young people die every day and thousands more are seriously injured and every single act could contribute to reducing the statistics and making the world’s road safe.

As a result of the above, Siaka raised funds through friends/family and also through his monthly earning to support crash victims at The Gambia’s only teaching hospital - Royal Victoria Teaching Hospital - in Banjul recently.

Dibba, who also doubles as the Programme Officer of the Gambia National Youth Parliament, was accompanied to the hospital by musicians, youth leaders, hospital management and religious leaders to meet road crash victims.

During the visit, the delegation had the opportunity to present gifts in the form of food items, pay hospital bills for those who could not afford, pray for them, and learn from their stories in terms of the impact of the road crash they have been involved in and also donate blood at the blood bank.

Giving birthday a new face is a new initiative pioneered by Siaka Dibba, who aims at inspiring the younger generation into the work of charity and giving back to their communities.

According to Siaka, he drew his inspiration from YCFaC, a non-profit-making organization founded in April 2011 by a group of young individuals who are motivated to give back to their communities.

“This initiative is in line with the objectives of the organization that is inspiring the younger generation into the work of charity,” he said.

At the end of the visit, Siaka continues to thank God the Almighty who has given him the strength, health and wisdom for the past years, his parents and entire family for supporting him all through out to grow to a responsible adult.

He also hailed his friends in The Gambia and outside who have denied themselves a family-size pizza to support the initiative.

He also calls on all to drive with care, for the life they save could be theirs.

He also informed the delegates about two new campaigns “Long Short Walk”, which is a unique campaign calling for pedestrian safety across the world initiated by ‘Zenani Mandela Campaign and Road Safety Fund’, and the “Global Road Safety Film Festival organised by LASER International in partnership with Youth For Road Safety.