A twenty-year-old writer in the making, one Modou Lamin Sowe, a Grade 11 student of Masroo Senior Secondary School is seeking assistance to publish a book.

Speaking to this reporter, Sowe said he has written a book, entitled 'Don't The Judge Book by its Cover,' but lacks the required resources for printing.

He said since at the age of 12 years, he started making use of books, through which he developed an interest in writing. He revealed that he attended Kabafita Lower Basic School, where he was known as a dramatist.

At the age of 13, Sowe won himself the third prize category in 2005 International Poster Contest of keeping the promise at ICPD, which was sponsored by the United Nations Population Fund, in collaboration with Population and Family Life Education.

According to him, he has been working on the manuscript for two good years, which he said, contains a story about a boy called Ismaila, whose mother has passed away, leaving him with his father, stepmother, brother and sister.

He admitted that the stepmother denied him the right to education as she always treats him badly. But he said through determination, hard work and dedication, the said Ishmaila grew up to become a patriotic citizen and after completing his education, he becomes a barrister at law.

He appealed to the government, NGOs and philanthropists to come to his aid.

‘U.S. calls for immediate release of journalists imprisoned for doing their job’ 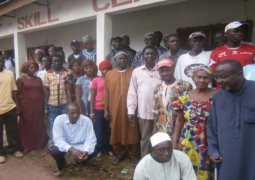