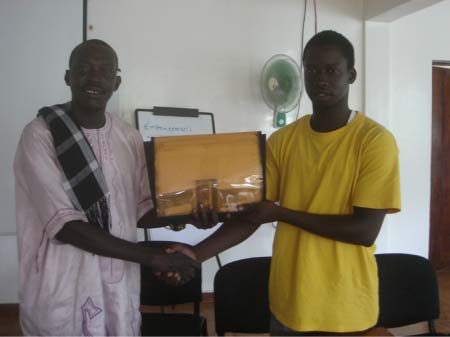 The Young Journalists Association of The Gambia (YJAG) on Saturday October 26 held a formal handing over ceremony for its new leadership.

According to him, the event was unprecedented in YJAG simply because it’s the first of its kind.

“Previously we used to have our congress day some time in a rush but this time around we decided that a special ceremony be dedicated to the activity,” he said.

He assured the new executive of his continued support and collaboration, noting that he received maximum support from the in-coming president throughout his term.

“As you could recall on September 21st 2013, just a little over a month, we assembled in this very hall to elect a new executive to steer the affairs of this great and promising association of ours,” he said.

“At that gathering, knowing very well my unshakable stance on YJAG and my passion for the group, my sister and colleague Ms Aminata Sanneh surprisingly nominated me for president.

“Even though I was never thinking of leading the association anymore as president with the belief that I have done my best for YJAG between 2007 and 2009 as pioneer President, members unanimous supported her move and elected me as 3rd YJAG President in fact unopposed,” he remarked.

He used the opportunity to thank the members for the trust they have in him and others once again to head the affairs of the association for the next three years.

The YJAG president further described the day as yet another milestone in the democratization process of the association.

“Since me alone cannot make YJAG achieve all its objectives, I call on all members including the outgoing executive to give me and my team all the necessary support.

“Personally once more, I promise to live by the ideals and principles upon which YJAG was founded.”

He added: “As I said in my acceptance speech after the election, I am committed in leading an all inclusive style of leadership through which I intend to involve all members seriously.”

Mr Jawneh reminded other members of his executive that they have the task of moving the association forward but was quick to say that this could only be achieved if they put aside their individual differences and work as a team, and each of them performing their duties effectively.

“We have the opportunity to learn from the experience of the outgoing executive, built on their success stories and avoid any mistake they might have committed,” he told the gathering.

“Like I told the new executive members during our first meeting, the executive is like a cabinet, we will disagree to agree but that does not mean that we do not value each others point of view. We must respect each others’ view and give one another his or her due. “

He encouraged all young journalists in The Gambia both in the print and electronic, private or public media to join YJAG for their own good.

Meanwhile, the ceremony was chaired by Sulayman Ceesay, secretary genera of YJAG, and the vote of thanks was delivered by Ms Nyima Jadama, 1st VP of the association.