Gambia international Yankuba Ceesay is key to Estonia club’s recent success at the UEFA champion’s league qualifiers after Kalju have grown another step higher into the European football qualifiers.

The team, which has now entered into the third round of the qualifiers, is set to meet Czech Republic side Viktoria Plzen today Tuesday  after seeing off HJK Helsinki last week in the second stages.

Last week, during the UEFA Champions league qualifying rounds against HJK Helsinki, Yankuba Ceesay set the pace for Kalju’s winner when he scored the opener leading to the team’s 2-1 victory over the Finnish giants, soccerway reported.

Fellow Gambian compatriot Demba Savage gave the Finnish’s consolation goal in the second period when opponents were two goals ahead into the campaign.

The first league in Finland ended 0-0. 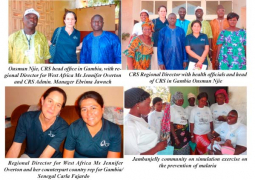