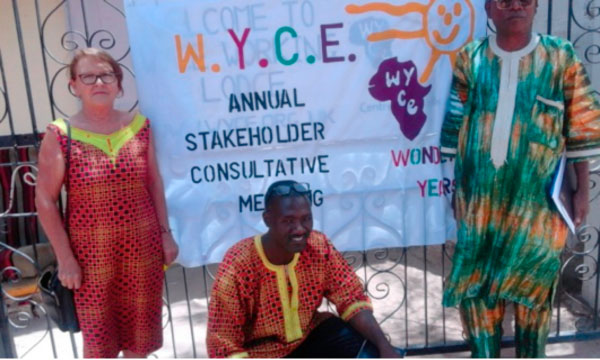 Wonder Year Centre for Excellence (WYCE), an NGO based in Medina Salaam village, recently conducted an annual consultative meeting at the WYCE headquarters at Medina Salaam.

The meeting was held to look at the organisation’s report and discuss its programme of activities over the year.

Speaking at the opening ceremony of the meeting, the coordinator of the project, Madam Gail Barry, a British national, said the year 2015 was a great success for them in terms of development and funding from partners and sponsors as well as through their income-generating initiatives.

She said their partnership with Re-cycle has gone from strength to strength and has provided them with the means to help themselves financially within the project.

She said further that they have also engaged in other income-generating projects.

According to her, Wonderland WYCE, a group of sponsors in the UK, had continued to support WYCE to raise money for a building project within the school.

She said the year 2015 also saw the construction and inauguration of a 3-classroom block at a cost of D322,000 all raised by Wonderland, whom she commended for the invaluable support.

She therefore thanked Wonderland for the support.

She also said Rotary Club in the UK raised funds to provide a solar pump for their water system, which enabled them to provide good supply of water to the lodge, the school and the clinic at a cost of D427,000.

During a visit to Medina Salaam village in November they provided funding to improve the school by fitting new windows in some classrooms, she said, adding that the development improved the ventilation and light for the students.

“Rotary Club also provided funding to paint some of the classrooms,” she added.

She said Rotary Club of Sweden also continued with their support and funding for the adult literacy class.

For his part, Lamin Kijera, Director of WYCE, also stated that through the support of the Ministry of Health and Social Welfare, Medina Salam Clinic benefited from the monthly outreach clinic to the village in 2015.

WYCE’s board chair Ebrima Jallow said that since their last stakeholders’ meeting to date they had renewed their memoranda of understanding with the Ministry of Basic and Secondary Education and the Ministry of Health and Social Welfare.

He added that they have also established cordial relations with more donors and volunteers mainly from the UK and are also collaborating with the following institutions: Gambia College School of Education, National Environment Agency, ADWAC, FIOH the Gambia, the NGO Affairs Agency Office of the President, TANGO, and GAMRUPA.

However, relationship with the above-mentioned institution has facilitated the strengthening of their programme delivery and the visibility of WYCE in the development arena.