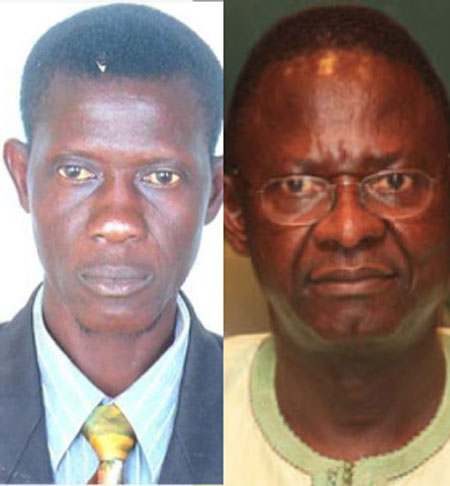 Workers across The Gambia yesterday 1st May 2013 joined the rest of the world to commemorate Workers Day also known as May Day, with calls for a 120 percent salary increase for workers across the board ‘to commensurate with economic realities of the country.’

The day was set aside to celebrate the social and economic achievements of the international labour movement across the globe, and celebration in The Gambia took the form of a march-past and the traditional May Day Sports, which featured, among others, track and field events ranging from sprint runs and relays to the tug of war, and musical chairs, all held at July 22nd Square in Banjul.

In an 8-page declaration of resolutions presented to Kebba Touray, minister of Trade, Regional Integration and Employment through Mass Axi Gye, the minister of Fisheries and Water Resources at the May Day parade, GNTUC Secretary General Ebrima Garba Cham described the day as “a time for renewal and reaffirmation of our adherence to the principles enshrined in the international accords and protocols signed purposely to focus attention on the plight and welfare of workers across the globe”.

These include the need to implement international labour standards, ensuring a decent workforce, re-establishment of the ministry of labour, social security and social welfare schemes for workers, among others.

Cham stated that these accords were founded at the height of the industrial revolution, when little or no attention was paid to workers’ welfare and tripartite arrangements.

‘Though countries all over the world have come a long way in addressing these issues, we must remain forever vigilant not only to guard against the reoccurrence of poor and unacceptable work conditions that existed in the early part of the last century, but to improve upon our gains and seek a more holistic pattern of development that attaches priority to worker welfare, dignity and respect in promoting fundamental rights and freedoms at the workplace.

According to him, the Government of the Gambia and the International Labour Organisation (ILO) are all concerned and committed to ensuring that better living conditions and decent work standards for workers and their families around is maintained.

‘It is against this backdrop that the decent work country programme is embarked upon to create jobs and to promote opportunities for Gambians to engage in dignified productive work. To say the least, we are poised to see that the rights and privileges of workers are jealously safeguarded,’ he stated.

Cham noted that in light of this, the GNTUC is concerned that commodities in the business sector are constantly on the increase, but wages for the workers have been stagnant and or, not commensurate with the status quo in the country.

This, he said, is certainly not helping Government’s drive to reduce poverty, and under the circumstances the prospects of achieving the MDGs and PAGE become difficult to attain.

‘Furthermore, we are aggrieved and seriously concerned that a large chunk of the workforce are working under poor working conditions, he said, adding that workers are being exploited by unscrupulous employers in various forms including unlawful terminations, unfair redundancies, unpaid accumulated annual leave, unremitted social security contributions, contract of appointment not issued to employees, harassment, among others.

Cham further stated that in view of the aforementioned, workers look forward with hope and aspirations on this day that their problems will be addressed, and called on the Government to pay particular attention to workers in both the formal and the informal sectors.

The GNTUC Secretary General on behalf of all workers in the country resolved that special attention is given to workers within the informal sector as they form the largest working population and have a tremendous stake in the socio-economic development of the country.

‘We suggest that the Hon. Minister of Agriculture introduce and encourage community farming in the crusade for self-reliance and self determination for food self-sufficiency and security;

‘We urge the Government, the private sector and parastatal institutions to consider increasing workers salaries by 120 percent across the board to commensurate with economic realities in the country,’ he added.

In a statement read on his behalf by Mass Axi Gye, the Minister of Trade, Regional Integration and Employment, Kebba Touray, said the Government recognized that the country’s most critical resource is its people, particularly the workers who are at the apex of its development agenda, and identified workers as the driving force towards becoming a middle income economy as envisaged in the Vision 2020 and amply demonstrated by the noble objectives of the national medium plan, the PAGE.

He stated that as the ministry responsible for employment matters, they treat employment issues with urgency and the utmost seriousness to ensure that labour relations are amicable at all times.

According to him, to maintain the desired labour relations, his ministry, directly and with the full engagement of the Labour Department consistently addresses any matters arising in a participatory tripartite manner.

Trade Minister Touray further stated that there is always room for improvement, and so employers must always understand that workers, being an integral part of their production processes, need motivation to do their best in a production set-up.

Noting that an abundance of workers in an economy is not an end in itself, but a means to an end, Touray said workers can only contribute significantly to the socio-economic development of a nation if they are disciplined in respect of universally acceptable work ethics, professionalism, and amenability to social dialogue and tripartism when aggrieved on account of bad working conditions, paltry remuneration, and other genuine concerns.