Awa Jassey, who was charged with stealing from a dwelling house, was on 15 October 2014 arraigned before Magistrate Bojang of the Kanifing Magistrates’ Court. She denied any wrongdoing.

According to the particulars of offence, on 1 October 2014 at Kerr Serign in the Kanifing Municipality, she stole from the house of one Mamudou Gibba the following: a laptop valued at D6,000, six speakers and DVD player valued at D7,000, TV set Samsung valued at D2,000, centre table valued at D1,500, two speakers woovers valued at D7,000, some clothes, shoes, necklace and fiscal cash of D5,000, total value D28,500, all being the properties of the said Mamudou Gibba, and thereby committed an offence.

She was granted court bail of D30,000 with a Gambian surety who should swear to an affidavit of means, and also to deposit an ID card with the court registrar.

In another development, one Hadim Samasi was on the same day brought before Magistrate Bojang and charged with receiving stolen property. He pleaded guilty.

He was convicted and sentenced to a fine of D5,000 in default to serve one year in prison.

The charge sheet stated that some time in July 2014, at Serrekunda Market in the Kanifing Municipality, he retained or had in his possession one I-Pad marked Apple valued at 500 Euros equivalent to D27,500 knowingly or having been stolen or unlawfully obtained, and thereby committed an offence. 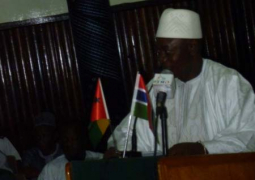 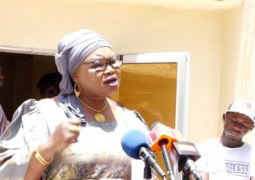