The Kanifing Magistrates’ Court recently convicted and sentenced one Marie Joof to a fine of D1,000 in default to serve one month in prison.

Marie Joof, who admitted the charge of common assault, was also ordered to keep the peace for a period of two years.

The facts of the case as narrated before the court stated that the convict and the complainant live in the same compound.

It further stated that on 7 December 2011, the complainant was laundering her clothes and the convict came to her and started using abusive words against her as well as pouring water on her feet.

When the complainant asked her why she was doing that to her, the convict slapped her, the facts of the case stated.

The matter was reported to Serrekunda Police Station where the convict was cautioned and charged with the offence committed.

According to the charge sheet, the convicted person, Marie Joof, on 7 December 2011, in Serrekunda, in the , assaulted one Isatou Jeng by slapping her and thereby committed an offence. 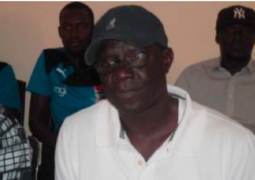 Minor changes in the judiciary