Police prosecutor Corporal Camara yesterday applied for a subpoen for one Lamin Manneh of Tanji village, to come and testify as the third prosecution witness (PW3) in the trial involving the two journalists, Sainey MK Marenah and MusaSheriff, at the Banjul magistrates’ court, before senior magistrate Lamin Mbye.

Musa Sheriff, editor-in-chief and publisher of The Voice newspaper, and Sainey M.K. Marena, a freelance journalist, were charged with conspiracy to cause a misdemeanour and publication of false news with intent to cause fear and alarm to the public, which both denied.

When the case was called, the prosecutor applied for the subpoena, and the defence counsel, LS Camara. It was granted by the court.

The case was adjourned to 16 April 2014, for hearing to continue.

Sainey M.K. Marena and Musa Sheriff were accused in count one, that on 6 December 2013 in Banjul and diverse places, they conspired to cause a misdemeanour to publish in The Voice newspaper a story headlined: “19 Green Youths join the opposition UDP” dated 6 December 2013, and thereby committed an offence. In count two, the two journalists were accused of the publication, knowing or having reason to believe that it was likely to cause fear to the public or disturb the public peace, and thereby committed an offence. 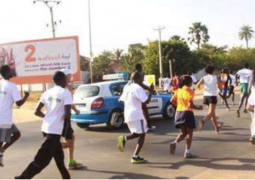