Lamin Jatta of Kasakunda Village on Monday continued his testimony under cross-examination by the fifth accused person, Sulay Jallow, at the Brikama Magistrates' Court before Magistrate Nkea.

The accused persons, Nambel Jawo, Omar Jallow Momodou Bah, Ansu Jarju and Sulay Jallow, sometime in 2008, at the Brikama Magistrates' Court, were alleged to have given false information to a police officer.

Testifying under cross-examination, the witness Lamin Jatta said he did not know anything about the black bull.

When asked by the accused person that if he did not know anything about the black bull, then why did he tell the court that the slaughtered bull was black.

In reply, the witness said that he saw the meat, but he did not know whether it was black.

He said what he knows that he was called to transport people from Kitti to .

The case was then adjourned to 1st September 2010 for continuation. 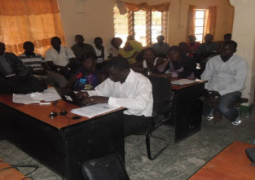