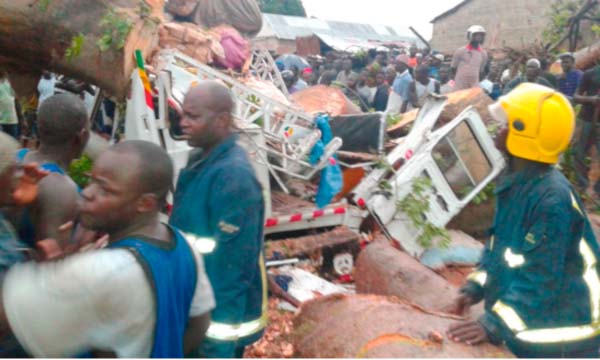 The Governor of the North Bank Region and chairperson of the Regional Disaster Management Committee, Ebrima KS Dampha, has underscored the need for people and transporters to be more vigilant to avoid standing under big trees to mitigate disaster and loss of lives.

Governor Ebrima KS Dampha made the remark while speaking on Saturday in Ndungu Kebbeh during weekly market day or Lumoo where a baobab tree fell down on a 22-seated Gele Gele commercial vehicle BJL 1042 D, driven by Baboucar Dem of Farafenni, which claim the life of Fatou Kah, a physically challenged mother of Daru Rilwan in Central Baddibou.

He expressed his shock at the preventable tragedy and extended his condolence to the family of the deceased on behalf of the Regional Disaster Management Committee.

Governor Dampha thanked the Barra Fire and Rescue Services and the community of Ndungu Kebbeh for their support and humanitarian services.

Bala Touray, Station Officer of Barra Fire and Rescue Services commended his men who supported the community of Ndungu Kebbeh in pulling down the fallen baobab tree from the top of the commercial vehicle.

He said people and drivers should be mindful to avoid standing and driving during strong wind. He disclosed that Samba Jeng of Kerr Pateh Kala in Lower Nuimi sustained serious injury and was rushed to Essau district hospital.

Alh. Malick Kebbeh, a representative of the alkalo of Ndungu Kebbeh and chairman of north bank council of elders extended their condolence to the family of Fatou Kah of Daru Rilwan.

The community leaders lauded the efforts of Barra Fire and Rescue Services, Ndungu Kebbeh Police and the people at the lumoo for their invaluable support and cooperation on the evacuation of people from the trapped vehicle.

He reiterated the need for the government to strengthen the capacity of Barra Fire and Rescue Services and Regional Disaster Coordination office to effectively respond to disasters on time.

The deceased was survived by a 5-year-old boy.