Delegates to the Gambia Football Federation elective congress have poured into town over night, for this morning’s elections now scheduled to take place at the Paradise Suites Hotel.

The electors would face two boxes belonging to candidates namely, Mustapha Kebbeh and Modou Musa, in a secret ballot.

They would first present themselves at the gate for verification and also once voting starts, the presiding officer for identification where upon they will be given votes proportionate to their status in the electoral code, example 3 votes for regions, 1 for a club and 2 for an affiliate association.

The  ballots would at the end of voting  be counted in front of the candidates, voters and the media as well as observers and the verdict announced by the presiding officer.

The GFF earlier announced they have invited the IEC to assist in conducting elections.

With 51 votes at stake, one needs at least 26 votes to win the seat for the presidency, and with both sides beaming with confidence right through, observers believe the margin of victory would be very small. 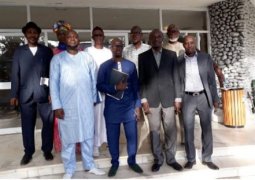