Now and again, consumers are billed heavily for electric and water consumption. These bills sometimes run very high so much so that consumers who are unable to settle their bills usually have their metres disconnected. When this happens, which is often, they run from pillar to post to have their metres restored. In return for their heavy bills, citizens expect to be given excellent services.

But this is not usually the case. Power outage is frequent, yet electric bills and water rates are astronomical. The reasoning is that NAWEC is not getting enough to meet its mounting costs. Sometime ago, it was even said that NAWEC was not able to meet its obligations to the public because consumers defaulted in settling of bills. But we now have cause to disbelieve this premise. Three NAWEC staffstand accused for alleged financial impropriety. They are Yaya Gibba (D190, 320); Ansu Jarju (D119, 255); and Abdoulie Jane (D211, 976.13). It is a case of the enemy within being more insidious that one outside. If consumers are paying their bills, and there are NAWEC staff allegedly feed fat on these bills, then NAWEC will always flounder. All of the money was not allegedly taken at a go. It was allegedly pilfered over time. It is an indication of a larger problem at NAWEC.

Could there have been some form of collusion somewhere? We think the public would like to know why it is so easy to dip one's hands into the coffers of NAWEC for such a long time without being caught?

As the trial goes on, we suggest that there should be a simultaneous audit at NAWEC to get to the bottom of how its revenue is being used or misused.

As for the trial, we leave that for the court to decide. But for the audit, we want to see it happening right now. We believe that is the only way we can get rid of this rot that has set in at NAWEC. If there are more people found wanting in any respect, they must be brought before the law to prove their innocence. There should be no sacred cows in the course of this exercise. The Gambian people deserve a better deal. 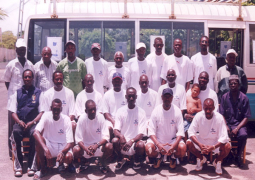