Seasonal diseases such as malaria, eye infection colds and flu are common during the raining season in the Gambia

During the rainy season in The Gambia in particular in the month of September and October with extremely high temperatures and increasing humidity there are increasing of seasonal disease such as malaria, eye infection colds and flu so called “Fresh cold” by some people affect the health of significant number of adults, chronically ill old people and particularly very young children who may even end up to lose their lives.

What are the flu symptoms different from Malaria symptoms

What is influenza (also called cold and flu)

Influenza, commonly shortened to “flu,” is an extremely contagious respiratory illness caused by influenza A or B viruses. Flu appears most frequently in winter and early spring. The flu virus attacks the body by spreading through the upper and/or lower respiratory tract.

What is the difference between a cold and flu

How are stomach flu and influenza different

How long is a person with flu virus contagious

What are the flu symptoms different from Malaria symptoms

Some of Malaria symptoms are quite similar to Flu or colds such as headache, join pain, fever but there is no obvious cough, sour throat and respiratory illnesses. Please note that the additional symptoms of vomiting and diarrhoea in young children could be further symptoms of a viral infection such as flu and colds too. However, it is strongly advisable to perform the malaria test by children suffering from flu symptoms to establish the correct diagnoses.

How do I find out if I have the Flu

What you should do if you get the Flu

The qualified and trained medical staff at any hospital and clinics throughout the country are delighted to advice you on seasonal diseases and to perform the necessary laboratory tests.

For further information you can send messages to Dr Azadeh on 7774469, 3774469 or send email on azadehhassanmd10@gmail.com 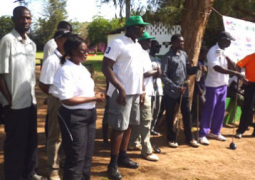