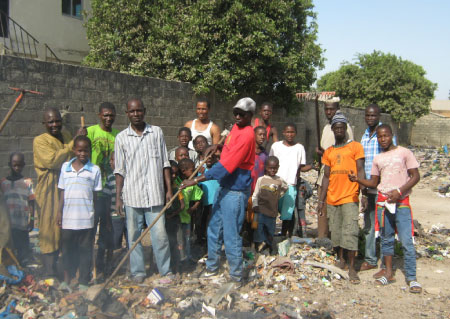 The residents of Wellingara in Kombo North District in the West Coast region recently held a cleansing exercise, locally known as set settal.

The voluntary exercise was attended mainly by the youth and some Wellingara police officers.

The volunteers took their time to remove rubbish from various locations and unofficial dump sites in the village.

Speaking at the exercise one Biran Ceesay, a resident and member of the organising team said he has been participating in many set settals in the community, but the latest one was unprecedented.

He also expressed delight at the participation of the Wellingara Police and then thanked the station officer for ensuring that their personnel equally participated in the exercise.

He also used the opportunity to call on the Brikama Area Council to give more support to the communities, by providing them with mobility to carry away the rubbish to the official dumping sites. Another volunteer, Bai Ali Ceesay expressed similar sentiment.

For his part, Bakary Sambou, an officer attached to Wellingara Police Station, thanked the youth for collaborating with them in the exercise.

He also seized the opportunity to advise the youth to desist from engaging in illegal activities, such as drug abuse and illegal migration.

He said henceforth Wellingara Police will continue to mobilise the youth of Wellingara in the fight against malaria and other related diseases.