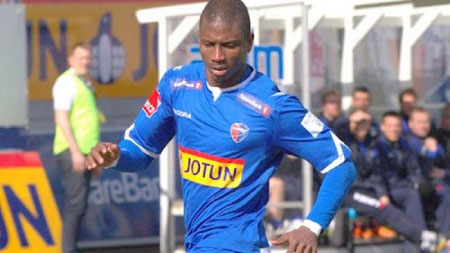 Tijan Jaiteh has now laid his focus ahead of upcoming encounters after scoring his second goal for Sandefjord  in the weekend’s Norwegian second highest league clash.

The Gambian mid-fielder made a career return to Norway after ending a successful spell with Brann in the higher league following a loan move to Randers in Denmark.

Jaiteh celebrated his club’s second goal against Tromsdalen on Sunday in just 22 minutes into the game to give his side the opener in their 3-0 triumph.

Tijan praised the whole team that emerged as a group from the first kick-off, according to club’s website.

”we were focused. We know how to play and the team did enough once again to solve the tasks in an awesome way. I am very happy for the victory,” said a satisfied Jaiteh Monday morning.

Jaiteh, who is also fully fit now, looks forward to the Friday night game against Mjøndalen.

He scored his first in and gave the club the winner when they triumphed 1-0 over Kongsvinger in May.

The club is now second on the table, 5 points behind leaders, Start, in 16 fixtures.

In the Norway’s upper league, Muhammed Keita’s Strømsgodset are so far topping the table with 39 points in 18 matches.

Keita recorded 2 goals in his name as part of this season.