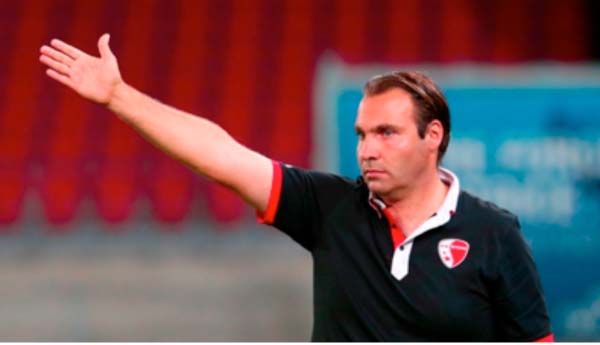 Raoul Savoy, head coach of the Gambia senior national team, has said his players would fight like lions in Namibia as they did against Cameroon to collect maximum 3 points and advance to the next stage of the World Cup qualifiers.

Savoy, who was speaking to reporters at a media conference following his side’s 1-all draw with Namibia in the first leg of the 2018 World Cup preliminary qualifiers at the Independence Stadium in Bakau, added that he believes The Gambia can still qualify to the next stage of the qualifiers.

The Scorpions’ coach described the first-half encounter against the Brave Warriors as “catastrophic” and “the worst” the team has ever played since he took charge in June.

The players were under a lot of pressure, he went on, saying they told them not to be before the game.

The players underrated Namibia after putting up a good performance against Cameroon, he further said, adding: “We expected to have it easy against Namibia.

“We told them to play to the game plan with confidence but after 3 minutes they were under pressure,” he also explained, saying, a player will be looking at his shoes and not focusing on the game after making two or three mistakes.

He also questioned the reason for fans not coming out in their large numbers to support the team, saying, he could not understand why in this country when Cameroon were coming the stadium was full and when the Scorpions were playing Namibia the stadium was not full.

He stated that they are rebuilding the team and needs fans at the stadium to boost the morals of the players whenever they are playing.

Fans were not happy with the players when we were doing badly in the first 20 minutes and even put more pressure on the players by booing them, he observed, saying that after 30 minutes they had 3 players injured (Sulayman Marreh, Momodou Futty Danso and Momodou Ceesay).

The game went complicated and they had to make 2 immediate changes, he also said.

“Namibia have an advantage over us,” he admitted, but was quick to add that they would fight on Tuesday without pressure to win.

They chose a game plan but it didn’t work in the first half as the players didn’t play to it, he also said.

He denied that his selection of players resulted in the team’s poor performance, saying they chose the right and committed players who were ready to fight for the country.

The Namibia team have been playing together for years now, he pointed out, adding that “for us we started building a team in June”.

He said he is fighting every day to convince the good players to come and play for The Gambia but they have been refusing and want to give him problems by blackmailing him.

The Spanish-Swiss coach refused to mention names but said he would not entertain any player who would demand to be in the starting XI weeks before the game in order to come and play for The Gambia.

The players have to prove themselves to be in the team, according to him. I select committed players and tried to build their confidence, he added, saying, GFF are working hard by giving everything to the players. “We have good players who are working very hard,” he said.

He denied any problem between him and the players or between the players themselves, saying: “We are together working very hard.”

In conclusion, he said he hoped the injured players would recover in time to face Namibia in Windhoek on Tuesday.