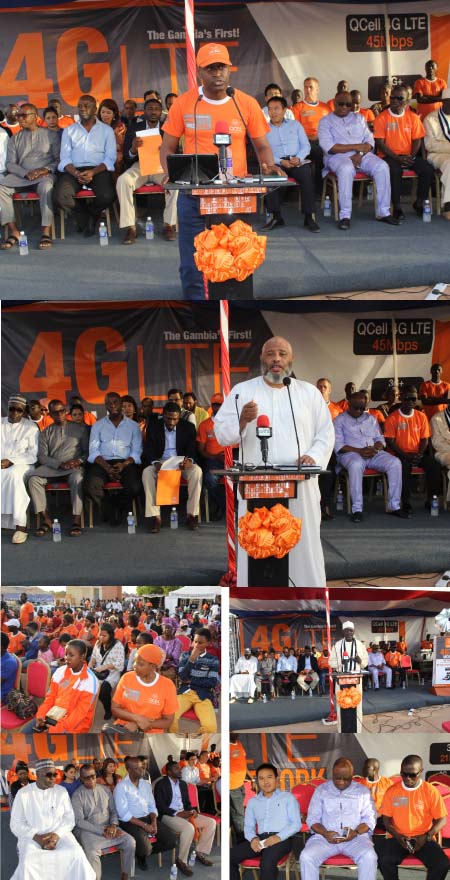 QCell Sunu Buss has launched its latest phase of the telecommunications revolution that will transform The Gambia to fourth generation mobile technology, at an occasion held at the GCCI Trade Fair in Bakau, on Saturday 6 May.

The 4G-LTE mobile network will provide the highest broadband speeds on mobile device to make interest cheap and accessible to its esteemed customers.

The 150-million dalasis project has a high range of coverage throughout the greater Banjul area.

The CEO of QCell, Muhammed Jah, in his remarks on the occasion said, QCell was pleased to bring the latest cutting edge technology to the doorstep of every Gambian with an affordable price.

“QCell will welcome the ‘NEW GAMBIA’ with ‘NEW SPEED’. Gambia’s digital mother tongue will be QCell’s 4G-LTE service. QCell’s LTE service will ensure that Gambians will have highest quantity, quality and speed of data at a cost-effective price,” he said.

The launching is a milestone for QCell and The Gambia, as they have ever been in the forefront of The Gambia’s telecom revolution in setting the technology trends in the country by aligning with the global standards.

He added that they are delighted to provide leadership in setting the technology standard for 4G services in Gambia by introducing the cutting edge FDD-LTE high speed wireless broadband.

‘’Today Gambia will be part of the few countries in the world to boast of having a 4G-LTE mobile network,” he said.

He revealed that QCell’s 4G-LTE has put The Gambia on the data superhighway providing lightning fast internet speed – HD video streaming, instant photo and video downloads and sharing will now be just a click away.

“QCell’s 4G LTE will contribute to the Gambia Government’s vision of broadband on demand and building The Gambia’s digital economy,” he said. “The speed of the rollout reflects the connection speed of the technology itself, which now places Qcell and the Gambia in the front rank of the world’s telecommunications provider.”

He added that QCell introduced the 4G LTE WiFi dongle, the 4G LTE Mifi Router for the first time in The Gambia.

‘’You can get all these 4G LTE products from any of our customer care centres, sales points or any of our Samsung stores,” he said.

He also emphasised the Q-Group and its contribution to the development of The Gambia.

He said the only way to forge ahead is providing quality network and reduce the high cost to its people and also meet to expectations. The people should trust in QCell, cherish and nurture it to strengthen in future for generation to benefit.

He thanked the government under President Barrow, stakeholders, PURA, GCCI and customers for their high contribution to the development of their company and The Gambia.

The permanent secretary of the Ministry of Information Lamin Camara said his ministry has over the years developed policies and launched initiatives to enable businesses and entrepreneurs to participate fully in the mainstreaming of our economy into the global digital economy.

He added The Gambia will only move forward if the private sector continues to invest into the national economy. QCell has been the giants in The Gambia’s technological ecosystem, on numerous occasions QCell has introduced innovative services in bloodstream of country’s GSM industry that is very much convinced in livelihood of it subscribes like the Sunu Buss Instant Roaming SIM Card, the USB data card, the Muslim phone, with it sin-built alarm system calling the Azaan for the five daily prayers, QPower, E-fankanta and Qodoo Mobile Money.

He added that these initiatives have proven the dynamism of QCell and the leader drive of its extraordinary energetic and committed CEO, Muhammed Jah.

Solo Sema, director of PURA, said PURA is proud to be associated with another milestone in our continued technological journey with the QCell 4G LTE.

He noted that investment in ICT infrastructure has largely been private sector driven. This act in The Gambia market has tremendous benefits, compared to a time a GSM sim card cost 500 dalasis.

With the 4G LTE service, customers will experience the most reliable and superfast mobile Internet connections.

“The technology was built specifically to handle mobile internet and data more efficiently, allowing faster and more reliable mobile connectivity in a world where data usage is increasing 250% year on year. Very few GSM companies have rolled it out in Africa, but the social and economic benefits are also enormous.