Sang Ndong, head coach of the Gambia senior national team, has admitted that his side was outplayed and outclassed by a superior South African side and as a result lost the game.

Sang Ndong, who was speaking to reporters at a press conference shortly after his side has been thrashed by Bafana Bafana at home on Saturday, added that he was disappointed with both the negative result and performance of his team.

“We were outplayed, outclassed and we lost,” he concurred, saying he was disappointed with the team and not the public.

“We played against a superior team,” he went on, saying South Africa are a bigger team but his side could have done better.

“Whatever we do we have our aims and objectives, which is rebuilding and rebranding as well as trying to reintegrate the national team back to the public,” he also said.

He noted that the game had given him the opportunity to see more home-based players and 3 players coming for the first time.

He said the defeat was not the worse of his career as a coach as he had lost more than 4 goals away before.

Winning home is very important to him but the process “we are in is not only about winning”, according to him.

Five days of training together was not enough for the team to jell together, he said, noting that in the process of rebuilding “you look forward to defeats because “if it is smooth all the way they will never learn”.

They have to accept the defeat and concentrate on building a team that will represent The Gambia in the next qualifiers, he further said.

“I have got a lot of things to assess and an opportunity to see other players,” he said.

“Fans got all rights to their opinion but we apologise for the poor performance and are appealing to them to be patient.

“We are building the team inside competition because you cannot confine yourself inside your home and know what is happening outside.

“We want to see as many players as possible and in the next 2 years we will come up with a permanent team we will call the permanent national team.”

Concluding, he said:“We are looking for people playing in recognised leagues and playing regularly.” 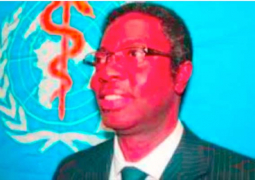