Speaking last Thursday at a victory celebration held at the Buffer Zone in Tallinding, President Jammeh said that his joy over the victory celebration is marred by the realisation that no one is helping him to make The Gambia the best place. This is a difficult statement to understand. Surely the president is enjoying the support of many people in his quest to improve the lives of Gambians? The Gambia employs many civil servants including teachers, nurses and those who work in the offices of government departments. It also enjoys a lot of help and support from the various NGOs active in the country, the various donations from other nations as well as philanthropists who regularly donate.

President Jammeh revealed that his government has spent over US$100 million towards the development of the country since 1994 but deplored the fact that almost 98% of that amount has gone to foreigners. Reading into this statement we must infer that the money has gone to foreign contractors. If this is the case then maybe something can be done to remedy it. It is understandable that many companies in The Gambia may not have the capacity to take on large-scale infrastructure projects but maybe there are other options. Perhaps a certain quota of Gambian workers could be required to be employed on any given project. Those who lack the necessary training could be required to be trained on the job. If this were the case then a portion of the money being given to the contractor would flow back into the Gambian economy and benefit the whole nation.

At the Brikama meeting on Saturday, the Gambian leader said that by the end of 2009, there will be electricity from Kartong to Koina and by 2011, there will be Senior Secondary schools in every 50km in Western Region, the largest region in The Gambia. This is indeed excellent and most welcome news. "Western Region, I owe you and I would pay you. You showed me that you trusted me, if not you would not have voted for me massively. I will make you proud among all the regions. You will have more than what the others have," he said.

This statement will be most disconcerting for the populations in other regions. Simply because the people of the Western Region voted for President Jammeh in very large numbers does not mean that they should be rewarded or that the President owes them anything. The President is elected by all the people and must serve the people of every region equally.

No one region can be singled out for special treatment in this way. We as a nation must all work together to support the government's development efforts and the government must reward us all equally. Only through unity of purpose and dedication to our collective cause can we continue on the road to development.


"I have come to the conclusion that politics are too serious a matter to be left to the politicians". 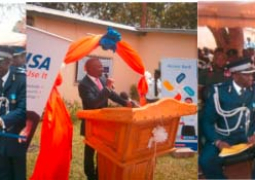