The West Coast Regional Disaster office on Friday organised a two-day sensitization forum for village development sub-committees within the region.

The sensitization was meant to build the capacity of the village development sub-committees on disaster preparedness and prevention.

In giving an overview of the National Disaster Management Act 2008, Cherno Jawla, a youth councillor and regional disaster committee member, said the Act was enacted to provide for an integrated and coordinated disaster management in the country.

According to him, it focuses on prevention, preparedness, response, mitigation and recovery from disasters or emergency situations.

According to Jawla, the disaster management continues an integrated multi-disciplinary and multi-sectoral process of planning, organising, coordinating and implementing measures necessary or expedient for prevention of danger or threat of any disaster.

He further stated that the activities undertaken before, during or after a disaster occurs to help reduce loss of human life, or injury to humans, property loss or damage, or to the environment, are very critical.

He also outlined other provisions of the Act offences  and penalties, which he said it is offence for a person without reasonable cause to obstruct, assault, threaten or abuse any officer or employee or any other person exercising powers or function under the Act section 122, sub-section 1a.

For his part, the acting-disaster coordinator for West Coast Region, Nyange Jeng, who presented a paper on the disaster terminologies, definitions and concepts, noted that the participants were exposed to disaster prevention, preparedness, response, recovery, risk, vulnerability and other eventualities.

He then used the occasion to thank the participants for responding to their invitation and also making the forum successful.

He said that the training will boost the capacity of participants in knowing issues affecting the community, as well as in responding to disaster mitigation. 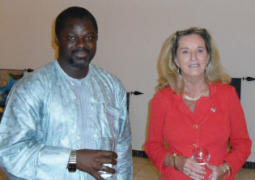