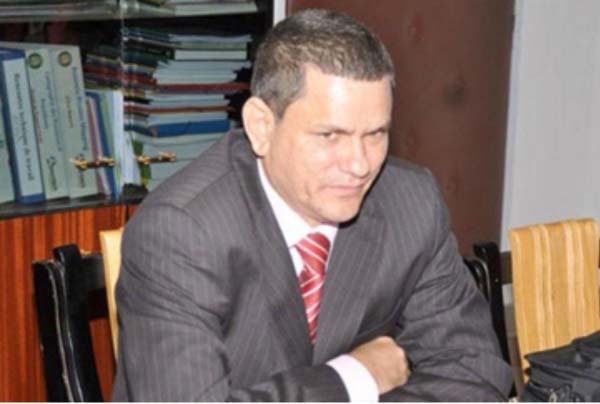 Dr Xaxier Crespin, Director General of the West Africa Health Organization (WAHO) of ECOWAS, Thursday arrived in The Gambia as part of a tour of the sub-region.

The visit was also meant to seek advice from the presidency, as well as assess the level of preparedness of the national response plan on the Ebola crisis.

As part of his visit, the WAHO Director General visited the Giboro border post and Banjul International Airport, and paid a courtesy call on the Vice President, Isatou Njie-Saidy, at State House.

Speaking during the courtesy call on the Vice President, Dr Crespin said that from their own assessment, the Ebola virus was not only an ECOWAS sub-regional problem, but also an international public health concern.

According to him, after meeting ministers in all countries at the end of March for available information through the states, Gambia’s was the first letter they had seen from all the ministers of health calling for joint effort in the fight against the Ebola disease.

However, he added, the response to the fight against the disease had been a little late from the international community.

With all the challenges facing the international world regarding the fight against the deadly Ebola virus, the WAHO Director General commended the Gambia government for a job well done by putting strong surveillance measures in place in the prevention of the Ebola disease.

Health and Social Welfare Minister Dr. Omar Sey, in his remarks, told the WAHO official that health is the number one priority in The Gambia.

Prior to the advocacy, The Gambia had gone ahead by putting in place surveillance measures in case of any outbreak of such deadly diseases like Ebola.

According to the health minister, the country’s ministries got a strong presidential directive regarding their contribution to international organizations, to be paid without any reservations.

“A strong political commitment and directive has been given two months ago, and we will do everything possible to make sure that we adhere to that,” Minister Sey told the WAHO director.

He thanked the director for all the support provided to the Gambia government through the Ministry of Health in the fight against the deadly Ebola outbreak in the sub-region.

Minister Sey also commended the UN agencies in The Gambia for their contribution to the health sector, especially in taking the lead in the fight against Ebola.

The Minister for Presidential Affairs and Head of Civil Service, Dr Kalilou Bayo, told the WAHO DG that WAHO’s assessment on the international community’s response to the fight against the Ebola virus was something very important to the President.

He also asked whether WAHO had in possession any new drugs that had been successfully tried, as the previous drugs had not been appropriate for Ebola.

He also enquired about the current stage of the response of WAHO regarding essential drugs, as the disease was not only a West African crisis but global .

Receiving the WAHO DG, Vice President Isatou Njie-Saidy congratulated Dr Crespin on his recent appointment, and expressed hope that they would work to meet the health challenges of the sub-region.

“I think this is a very important visit, and it came at a time The Gambia has gone far in our state of preparedness in terms of addressing the issue of Ebola in The Gambia under the leadership of President Jammeh,” the vice president said.

Mrs Njie-Saidy further expressed the need to strengthen the country’s national health system with support from regional bodies like WAHO.