Jammeh EK Bojang, WAFU Zone A Secretary General, has called on coaches to seek as much education as possible, as there can be no development without education, weather personal, national or global development.

“Education is prime in our lives”, he stated, pointing out that, “even if prophets hadn’t had education from the Lord they would not have been able to dispatch the knowledge to humanity, which all happened through education”.

He said he was proud to be part of “an education process”, and that weather for coaches, administrators, sports medicine officials or referees, education is prime, he went on.

Bojang added that the coaches show keen interest in education during the course.

“You are role models for young people”, he told the coaches.

People love the game, but if education is not there then their love for the game is not complete, according to Bojang.

Mr Bojang, a sports administrator, called on the Ministry of Youth and Sportsand the incoming GFF Executive Bureau to give importance to football education.

“Honestly speaking, without football education we will just be circumventing around a spot and will not go forward.”

“I want to ask you to continue to tell CAF that The Gambia is in need of education,” he also said, adding: “Let CAF come to our help any day we call them.”

“You are the direct actors of young people of this country”, he further told coaches, calling on them to read books, go to the internet and read so that tomorrow we can be like Ghana which has a local coach for the national team.

He further challenged coaches to read about every aspect of the game, from refereeing, sports medicine to all other aspects of the game, noting that the wider their scope the better they are as coaches and the greater service they will be to this country.

He stated that he saw potentials in Lamin Sarr (the local instructor for the course) and recommended his appointment as a regional coach to the then GFA Executive Bureau,and thatthrough the process he has seen him grow to be a CAF instructor in coaching, which is a big plus for Sarr.

SG Bojang thanked the Ministry of Youth and Sports (MoYS) for cooperating with the Normalisation Committee of the Gambia Football Federation to host this course.

The government has an important and crucial role to play in the development of football, he went on.

The presence of the deputy permanent secretary MoYS during the opening and closing ceremonies of the course shows the importance the government attaches to football development, he noted.

Pa Suwareh Faye, the president of the Gambia Football Coaches Association, said “the course was long overdue, but better than none.”

He went on to thank the GFF and, in particular, the NC for the giant strides taken in coach education development which took place during their time in office.

He also commended the MoYS for their contribution towards the success of the course, and the coaches for their participation and dedication.

Pa Faye as he is widely called, challenged the GFF Technical Director to ensure that by 2017 the Gambia has ‘B’ License and Pro License holders.

In conclusion, he also thanked Ebrima Manneh, the GFF Technical Director, for the hard work in ensuring that The Gambia benefits from such a course.

After going through the course, the coaches have a lot of work to do and wished them good luck in their careers, he concluded.

Anthony Edusei, the CAF assessor and examiner for the course, said the objective of CAF’s educational programme for coaches is to build their capacities.

“CAF would like to establish the fact that before a coach can be well-equipped he has to impact the right kind of knowledge to his or her players”, he went on, adding: “He or she should undergo proper training in order to have the necessary skills to be effective and efficient in his job.”

For the past few years, CAF has made it possible for member associations to organise such courses in order to upgrade the knowledge of their coaches, he further said, adding that he was surprised to know that this was the first CAF ‘C’ License course in the GFF Calendar, but “it is better late than never.”

Coaches have proved beyond every reasonable doubt that they are really capable, he stated, and that once they are capacitated they will be able to deliver.

It is up to the coaches now to build this as their stepping stone, as it is their own career that they are trying to build after this foundation, he went on.

“Whatever you put on the foundation determines how far you go,” he continued, adding: and “So therefore the challenge is theirs (the coaches).”

Coaches always need support, the CAF assessor from Ghana further observed. There are certain factors that should be put in place for the coach to establish himself or herself and to achieve the requisite results, he further stated.

It is up to the various football clubs in the country to try and get training fields and the requisite equipment for the coaches to be able to work effectively and efficiently, he said.

They also need funding, which should not be coming from the pockets of the coaches but rather emanate from the government and through the football federation.

“In Africa I know it is not easy raising funds for the game of football”, he added.

Every country in Africa now is aspiring to be counted among the elite in the world in terms of football, he went on. “We cannot achieve much without plenty of funding.”

He therefore appealed to the football federation to ensure that adequate funds are available for the development of football in the country.

“You have been fed with knowledge to impact more modern skills into your training programmes”, he told coaches. Now that they have the skills, it is up to them to go and showcase them, he added.

“Go and prove that you came here not to waste your time, but to spend it profitably”, he further told coaches, adding that “together we can move the continent forward in terms of football.”

“CAF is ensuring that all federations who wish to develop their training programmes for their coaches will always get the support from them”, he assured the gathering, and that “it is up to every single federation to aspire to develop on its own.”

The Gambia needs to push forward alongside those who are aspiring to go far, he pointed out.

Ebrima Manneh, the GFF technical director, said two weeks ago they thought that this was not achievable, but at the end of the course they have accomplished more than what they set out to achieve.

“Today, I witnessed the brilliance of our inner will, A few of you who stood up today in that classroom to express your desire to be successful in this noble trade we call football.”

He added that he has confidence in them, and called on them “not to be distracted, as God knows what their future holds.”

Manneh said the course has given them something to treasure, and that they have learnt during the past days that none of them should allow the strengths of their colleagues to fail when they can all stand by them.

Coaches are the future of Gambian football, he stated, while promising to stand by them.

GFF technical director Manneh announced that they intend to organise another ‘C’ License course in February/March 2015, and a ‘B’ License course by August-September 2015. 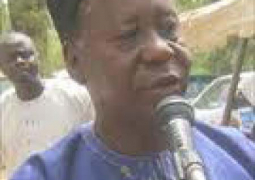