The West African Examination Council (WAEC) on Tuesday opened its 61st annual council meeting at the Kairaba Beach Hotel in The Gambia.

The official opening ceremony of the five-day meeting was attended by delegations from the five English-speaking member countries of Ghana, Liberia, Nigeria, Sierra Leone and The Gambia.

In his official opening statement, on behalf of President Yahya Jammeh, the Minister of Presidential Affairs, Dr, Njogu Bah welcomed the delegates to the ‘Smiling Coast of Africa’.

According to him, examination in our countries were in the past conducted by the examining boards in the United Kingdom on syllabuses developed to reflect the values and ideals of the colonial order.

He said the system failed to consider and cater for the immediate environment of the candidates.

“The establishment of the West African Examination Council in 1952 was therefore a natural development flowing from one great desire to have an examining body, with its own traditions to provide the sub-region with an educational focus that is both relevant and vibrant,” he said.

He said for over six decades now, WAEC has grown to establish a reputable institution that can be relied upon by its member countries with faith and hope in the future.

Apart from having survived where almost all other pre-independence, inter-territorial organisations in Africa have failed, the council has played a prominent role in the educational development that has taken place in the sub-region over the decades.

According to him, the council through its Banjul office has played an active and positive role in the development of education in The Gambia.

For his part, the Chairman of WAEC, Professor PIUS Augustine IKE Obanya, said WAEC was mandated to determine the examinations required in the public interest in the English-speaking West African countries, to conduct examinations and award certificates of comparable standards to those similar examining boards internationally.

Professor Obanya hailed member countries for their continuous support and collaboration with WAEC.

The council, he said, is the governing board and highest decision-making  organ of WAEC.

Speaking earlier, the Registrar of WAEC, Dr. IYI Uwadiae, commended the people of The Gambia for the hospitality accorded them.

He revealed that the council has continued to record increase in the total candidature for its international examination, the WASSCE.

Even though the Council’s examination was conducted leakage-free in 2012, the Registrar lamented cases of collusion, mass cheating, use of cell phones to cheat and the non-appearance syndrome, as some of the problems reported from various countries.

Fatou Lamin Faye, the Minister of Basic and Secondary Education, applauded WEAC for choosing Banjul for this year’s meeting and for conducting credible examinations in the country.

She also spoke at length about the collaboration between her office and the WAEC Banjul Office. 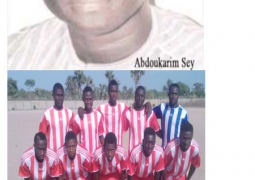