Various veterinarian doctors were recently sensitised on the SPINAP-Gambian project at a one-day workshop held at the Abuko Veterinary conference hall in Abuko.

The project, being implemented by 47 ACP countries, is designed to respond to escalating global threat of Avian Influenza, especially its introduction in in 2006.

SPINAP-AHI is one of the major Pan African efforts to combat HPAI.

The sensitization programme was organised and funded by Support Programme for Integrated National Action Plans for Avian and Human Influenza, SPINAP-AHI–.

In giving an overview of the project, the National Coordinator for SPINAP-Gambia, Dr Kebba Daffeh, explained that the project is a three-year programme executed by AU-IBAR and funded by the European Commission (EC) and African Union.

According to Dr Daffeh, the aim of the project is to contribute to the reduction of the potential socio-economic impacts and loss of human lives resulting from Avian Influenza in 47 African ACP countries.

"The purpose is to strengthen the national capacity to prevent and control AHI," he added.

The total budget for SPINAP Gambia is US$300,000 and the duration of the programme is 18 months, he noted, adding that many sectors have benefited from the project.

"This is achieved through provision of financial and technical support to enable participating countries to prevent HPAI outbreaks and ensure speedy containment where infections occur," Dr Daffeh said. "The expected output of the programme is to strengthen veterinary and public emergency preparedness and response capability of veterinary and public health system in target countries." 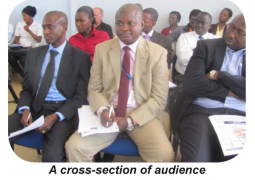 Econmywatch: Trade Fair Gambia: What is in the offing