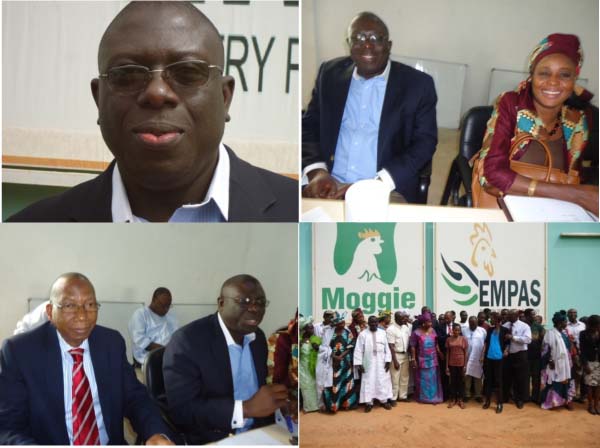 The management of EMPAS Poultry Processing Company with support from the Gambia Growth and Competitiveness Project through the out-grower scheme Monday organized a day-long orientation session for EMPAS Poultry Out-grower Scheme entrepreneurs within their six Centres of Excellence held at the Farato Hatchery Farm in Kombo South.

The purpose of the orientation session was to bring poultry out-growers entrepreneurs to the daylong orientation activity, which would be followed by a six-week training course, starting on 14 January 2015 for the six Centres of Excellence.

This would be followed again by a TOT session for the farmers around their vicinity, with the aim of sharing with them basic knowledge regarding the proper management and caring of poultry chicken in their farms, as well as to discuss with the staff of EMPAS company in terms of boosting their production to become self-reliant in their business.

The training activity was also designed to ensure that with the cooperation and determination of the out-growers poultry farmers, EMPAS Company is ready to provide them a market to ease their concerns and the constraints hindering their poultry production.

EMPAS aims is to ensure that there would be enough chicken to avoid the importation of chicken into the country, which could only be attained through a collective effort, determination and hard work.

In his welcome remarks, Edrissa Mass Jobe, the chairperson of EMholding Company, expressed delight to the participants for responding positively to the orientation capacity building course, which was a clear indication of their commitment, love and care for their business.

He gave an overview of the EMPAS Poultry Processing Company, explaining that the project, which was the Out-grower Scheme, was motivated by a core belief in national food self-sufficiency and national pride as the cornerstone of development.

This core-belief, he added, includes an effective back-to-the-land agenda, which would not only provide food for the masses; it would also provide employment in greater numbers, increasing the buying power of many individuals and consequently reduce poverty.

The core-belief also is that poultry is a natural food for most poor Gambians, and an out-grower scheme is easily adapted culturally, socially to the village way of life, and that the tourism sector has the potential to contribute to the increase in demand of locally-produced foods, especially in our grower schemes covering small producers and poor communities, he said.

According to Mr Jobe, EMPAS Poultry is a value-chain driver, and the premise of the company is that the poultry system is highly inter-related and could not be addressed by a single discipline approach.

He said whilst not trying to be in all aspects of the value chain, they believe their role was to coordinate the system, including the parent farm producing the hatching eggs.

Mr Jobe further stated that to coordinate this at the national level, management and economic capacity is important, which is found at the firm and not at the household level; thus this partnership with the out-growers.

EMPAS’s vision of the poultry out-grower model is to create in the farming communities’ satellite enterprise out-growers, Mr Jobe added.

In her presentation, the project coordinator EMPAS out-grower scheme, Joyce Riley, said many Gambian farmers over the years, often with the support of NGOs and multi-lateral agencies, have commenced and abandoned various poultry schemes because of constraints such as lack of a hatchery, prohibitive quality feed costs, and the lack of a processing plant.

According to her, EMPAS Out-growers Scheme, came to address these problems, adding that the project partnerships they seek to commence have been tried and studied at great cost.

“We continue to be inspired by the need to initiate a well constructed and driven integrated value chain,” she said.

Ms Riley further stated that the Gambia Growth and Competitiveness Project, a public sector stakeholder, has already come on board providing support based on agreed deliverables with EMPAS.

Nfamara Jammeh, who spoke on behalf of the Ministry of Trade, said the occasion marked yet another important milestone in the country’s drive to ensure a solid and sustainable industrial development process, particularly in this underemployed sub-sector - poultry.

He recognised and appreciated the consideration of the management of EMPAS for opting to invest in this underemployed sub-sector, which he was convinced has a high propensity to contribute immensely to the overall socio-economic development as defined by the government’s development blueprints - the Programme for Accelerated Growth and Employment, PAGE, Vision 2020 and Vision 2016.

He implored the management to look into the future with greater optimism to ensure a suitable path, as the company prepares to execute its business plan in the years ahead.

Bombardier in the witness box 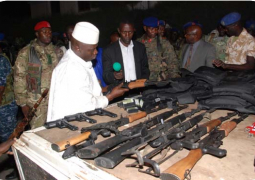