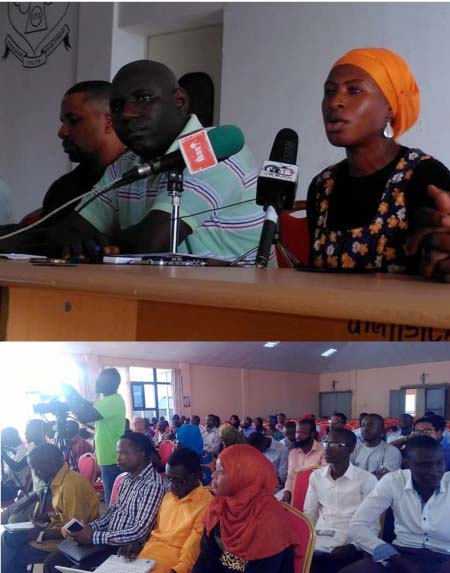 After ten days, the staff association of the University of The Gambia (UTG) on Friday brought to an end a sit-down strike it organised over poor wages, lack of capacity building opportunities, and poor facilities. Lectures have resumed on Monday.

The strike ended following a meeting on Wednesday between the Minister of Higher Education, Research, Science and Technology (MOHERST), Badara A. Joof, the UTG administration and the executive of the UTG Faculty and Staff Association (UTGFSA).

The parties reached a deal, which the UTGFSA called “satisfactory”, to end the strike that has seen the beginning of the second semester disrupted, as lecturers and other staff of the university sat at home in protest, saying they would not go to work until and unless their demands are met.

In protest, the UTGFSA wanted the dissolution of the university’s senior management team (SMT).  The association had accused the SMT of pursuing misplaced priorities by buying vehicles for themselves (the senior management) when employees of the UTG are poorly paid, denied benefits for further training or studies, lack a fully-equipped physical or E-library and internet connection, and poor sanitary conditions at the university.

At a meeting between the UTGFSA and the minister of higher education, a nine-point agreement has been reached.  As part of the agreement, the SMT “is dissolved with immediate effect”, and the positions that are not reflected in the current UTG budget would be abolished.

The agreement also included the reconstitution of the University Governing Council with a mandate of being the sole authority to make senior appointments at the university.

The tripartite meeting also agreed that an independent audit of the university finances to be undertaken as a matter of urgency, and also the acting vice chancellor, university registrar and finance director to facilitate the procurement of 50 computers to be distributed equally between the School of Business in Kanifing and the School of Arts and Sciences in Brikama.

As part of the deal, the deputy vice chancellor (administration) should expedite the procurement process for laptops earmarked for university staff and students.

“This assignment should be accomplished latest 22nd March 2017.  For logistical reasons, the distribution of the said laptops should begin with the academic and administration staff and later the students,” the parties said.

Mr. Joof, minister of higher education, has asked the university authorities in collaboration with the Governing Council to put in place a committee that would review the pay structure of the university.

He promised to use his contacts to assist the university authorities in leveraging additional resources for the institution. The minister’s next meeting with the group is scheduled for 20th March 2017.

At the UTGFSA congress on Friday, it was unanimously decided that the action taken by the minister was satisfactory in so far as the demands of the faculty and staff association are concerned.

UTGFSA president Dr Ismaila Ceesay said: “It was, therefore, decided that the strike action be called off, and that both faculty and staff of the university should resume work on Monday, March 13, 2017.”