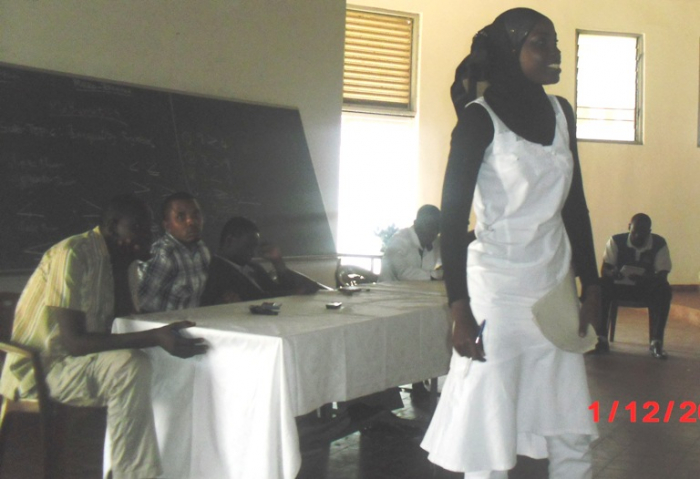 “Africa’s Underdevelopment is externally induced” was the topic the intellectual students of the University of The Gambia debated yesterday. The two groups, each with three participants, involved were the Political Science students and the Development Studies students.

Speaking at the opening ceremony, the Head of Department of the Social Science, Dr Gomez said that the debate is just a game and an academic exercise. “It helps you to be more vocal,” he added. Before the debate started, the criteria were read out to the audience; they were the correct use of the English language, subject matter and knowledge.

Speaking for the development studies students who were for the motion that Africa’s underdevelopment is externally induced; Ebrima Saidykhan said that Africa has nurtured the potentials of growth, but it was slavery, colonialism and the Structural Adjustment Policies (SAPs) which caused the under-development of Africa. He argued that slavery has made Africa to lose millions of able-bodied men and women to Europe and America.

“The West colonized us for 400 years so that they can use our natural resources to develop themselves whilst under-developing us.

Nyimasata Camara from the Political Science side which is against the motion, said that human freedom is also a part of development and slavery has not given us freedom. “It was the same Africans selling their brothers to the Europeans,” she blamed Africa for its own under-development. She made mention of Africans’ willingness to accept aid from the West with the knowledge that the loans will be mismanaged by leaders through bad governance.

Saffiatou Drammeh, a strong woman for the development studies side, blamed colonization and the SAPs for our under-development, which brought along the retrenchment of workers, privatization of government enterprises and institutions which have caused lots of Gambian families to suffer because they are victims of these policies.

Demba Kandeh blamed the Africans for their openness and kind-heartedness.

Lamin Darboe from the Development studies rounded up for his side saying that their co-debaters have said it all that Africans were always known for their kindness so the West took our kindness for our weakness thus, leading us to our under-development which is externally induced. He strongly blamed the Bretton Woods Institutions for our under-development. He further went to argue out that the West were and are still siphoning our natural resources, liberalizing our term of trade and determining the price of raw materials which they make into finished goods and sell back to us at exorbitant prices to develop their countries and simultaneously under-developing us.

At the end the Development Studies department came with 136 points and the Political Science department had 129 points, which was so close. Delivering the results, Mr. Ismaila Ceesay, a political science lecturer, said that debate is the life blood of academia. “It is the most effective way of learning,” he added.

Speaking at the end of the debate, Nfamara K. Dampha, who is a recent beneficiary of the Taiwanese Embassy scholarship package, a third-year student majoring in Development Studies, and the president of the social sciences Association (SOSSA), said that the objective of coming up with such a good initiative is for students to exchange knowledge and develop knowledge  themselves intellectually and academically.