US Embassy Reaches Out To The Needy

The United States Embassy in Banjul as part of Ambassador's Ramadan gifts to the needy, poor and disabled has recently distributed bags of sugar and rice to the residents of Bakau Kachically Mosque.
Speaking at the presentation ceremony held at Bakau Kachically Mosque, Mr. Saikou Sanyang, the Secretary-General of the mosque told reporters that the humanitarian gesture undertaken by the US embassy is a step in the right direction.
According to Mr. Sanyang, the donated items would go a long way towards helping those in need in this holy month of Ramadan. He described the gesture as timely while urging others to emulate the US Embassy's gesture.
He added that the US Embassy has been contributing towards the socio-economic development of The Gambia in all spheres of the economy.
Another beneficiary Ma Sereh Bojang, hailed the embassy's gesture as worthy of emulation, adding that it is a clear testimony of Ambassador Wells' commitment towards helping the needy and the poor in The Gambia.
Kaddy Fatty and Nading, both beneficiaries also expressed similar sentiments, while calling on the rich to help the poor and needy as stated in the Holy Qur'an.
Ambassador Wells was commended for the work he has been rendering to Gambian people. 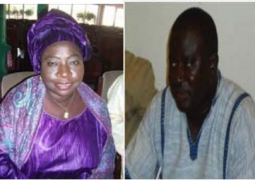