US Embassy provides $25,000 grant for Casamance refugees in Gambia 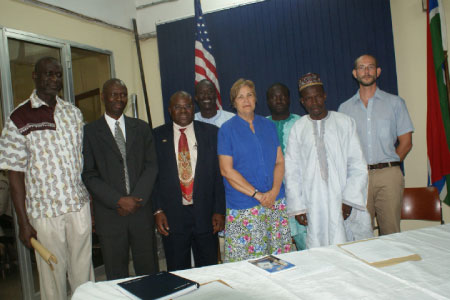 The United States embassy in Banjul has given grant to two local NGOs through the Julia Taft Refugee Fund of $25,000 to support refugees and their host families in The Gambia, who fled from the conflict in Senegal’s southern region of Casamance.

The fund is intended to meet gaps in the ongoing refugee programs, and primarily to support projects that assist refugees or refugee returnees and their host family within the Fonis in the West Coast Region of The Gambia.

Speaking at a signing ceremony held at the US embassy on Tuesday, Cindy Gregg, deputy chief of mission, said the TAFT funds are provided to ambassadors to respond to critical gaps in assisting refugees in meeting their immediate needs.

Ms Gregg citing current statistics said the refugee population is nearly 6,442 hosted by 481 families in 70 villages in Gambia’s West Coast Region along the border with Senegal.

She noted that despite previous donor and government interventions, greater support is needed to assist host families and refugees, particularly in the light of sporadic outbreak of violence in Casamance.

“Therefore, the signing of this contract agreement for these grants is the first step in our partnership in a bid to address some of the critical needs of refugees and their host families in the West Coast Region,” she told the gathering.

The outgoing US diplomat, who will be leaving Banjul today, said she has no doubt that the projects selected will meet the development goals in addressing the critical needs of the refugees.

Saihou Sanyang, head of the United Nations High Commission for Refugees, (UNHCR) Banjul office, recalled that their mandate is to promote and protect refugees, and that last year they had a similar signing ceremony geared towards helping the refugees fleeing conflicts in the region.

The UNCHR official disclosed that there are 9076 refugees, out of which 9042 are from the Casamance region mostly women and children living in 57 villages in the Fonis.

He lauded the US government through its embassy in Banjul for its foresight in granting $25,000 for refugees in The Gambia, describing the grant as ‘ timely’ considering last year’s crop failure.

“The Gambia government declared a crop failure, and this will not only affect the host families but also the refugees,” he said, while appealing to other institutions to emulate the gesture of the embassy.

Sanyang called for accountability and transparency in the implementation of the grants as the refugees are the main beneficiaries.

Momodou Nai Ceesay, chairman of the Gambia Refugee Commission, shared similar sentiments, noting that the grants will go a long way in helping the most vulnerable.

On behalf of the government, Ceesay commended the US government for the assistance.

Yankuba Manneh, program manager, St Joseph Family Farm, and Arfang Kanuteh of Hope for Children who signed on behalf of their NGOs hailed the US embassy for coming to the aid of the refugees.