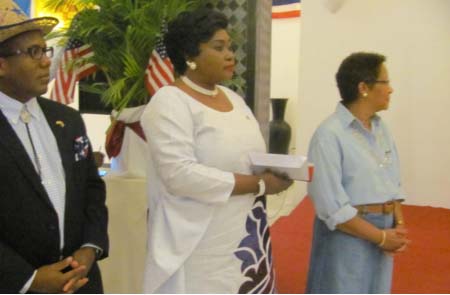 July 4, 1776 was the day the United States of America attained Independence, from Britain, but the US Embassy in Banjul in respect of the month of Ramadan decided to observe in The Gambia the US Independence on 3rd June.

Speaking at a reception held on Friday at the Coca Ocean Hotel in Kerr Serign in commemoration of the occasion, the US Ambassador to The Gambia, Caroline Patricia Alsup, said: “Tonight though, our focus is on celebrating America’s Independence Day. We are celebrating a month early out of respect for Ramadan, but early or late it is a day we Americans cherish.  It is a day we remember the historic events of July 4, 1776, when our Continental Congress issued a Declaration of Independence from British rule. For 240 years now, the United States has struggled to make that declaration a reality.”

Ambassador Alsup, who thanked the dignitaries, including government officials, members of the diplomatic and consular corps, and eminent personalities that attended the function, said that in the face of the challenges of the 21st century, dialogue between the U.S. and The Gambia is central to advancing relations between the two nations, and advancing US’s shared goals for The Gambia, Africa, and the world.

She added that President Obama began that dialogue anew at the first-ever U.S.–Africa Leaders’ Summit in 2014, which highlighted the importance of trade and economic linkages to America’s partnerships with the countries of Africa in their development drive.

“In The Gambia,” she said, “one of the goals  that the U.S. government shares with the Government of The Gambia is for greater economic prosperity for all Gambians through development of The Gambia’s human as well as natural resources.”

The Gambia’s large youth population is both a challenge and an opportunity for greater economic prosperity, she said, adding that in The Gambia, over 60 per cent of the population is under 25 years of age, a percentage which continues to grow.

“Working with the government of The Gambia to develop the next generation of Gambian leaders is an important priority for the United States,” she continued.

“In addition to the Government of The Gambia, we have partnered with the private sector, with the United Nations, with non-governmental organizations and with businesses and universities to harness the energy and creativity of The Gambia’s youth in order to help propel The Gambia forward on the path to economic security.”

Ambassador Alsup said the U.S. Embassy-funded Startup Incubator project, which is run by the Gambian-American Chamber of Commerce, has become a prime showcase for the potential of Gambian youth.

This, she added, is also contributing to preventing some youths who may be tempted to take the “back-way”.

She also highlighted President Obama’s Young African Leader’s Initiative or YALI, as it is commonly called, which is out to help The Gambia’s youth achieve their full potential, as it is happening in other African countries.

“Currently, 15 young Gambian leaders are preparing to go to the U.S. to take part in YALI leadership development programmes. We look forward to welcoming them home in a couple of months and then working with them to build a better future for The Gambia.”

She also mentioned their recently launched six child welfare centers in the Fonis for the benefit of refugee and host family pre-school age children.

“To support development of The Gambia’s natural resources, the U.S. government, through our Department of Agriculture, funds the Senegambia Cashew Value Chain Enhancement Project to the tune of $8.6 million,” she said.

“This is a cross-border project targeting more than 20,000 small-holder cashew farmers and processors, about 6, 000 of them in The Gambia.”

On Democracy and Elections

Ambassador Alsup said while the US upholds the values of democracy and human rights, freedom of expression and free press, they would be happy to see respect for such values in other nations around world.

“As a people, we welcome the bounds of democracy, we welcome being ruled by laws that ensure peaceful transitions of power.  These transitions are peaceful because people believe that throughout the electoral process their opinions have been heard, their concerns addressed, and their votes counted.

“This is the power of an open and transparent political process where all parties share their opinions, and then the outcome is determined through a fair voting process.  I hope that in the run up to the December election, the people of The Gambia too will enjoy a lively and open political debate that will ensure a free, fair and peaceful election.

In her remarks on the occasion, Foreign Affairs Principal Assistant Secretary Dr Mariam John, who represented the Deputy Minister of Foreign Affairs, Hon.  Yam Bamba Njie Keita, congratulated the United States of America “on their joyous and historic event.”

“Indeed, 240 years of Independence deserves to be celebrated, and I can testify that it is well celebrated as one cannot just miss to see the American colours being well presented this evening.”

She added: “The Islamic Republic of The Gambia and the United States of America have historic ties, as the relation goes as far into the past before independence, and is even today manifested by the maintenance of official diplomatic relations between the two nations and the presence of US Peace Corps in Islamic Republic of the Gambia for well over 40 years now.

“The Gambia-United States relationship is one of partnership, and as partners we have engaged each other through constructive dialogue as a means of reaching a common ground and follow effective and efficient strategies for cooperation for the achievement of our shared objectives of development and progress across all sectors.

“We are indeed hopeful that our relations will continue to be strengthened in the quest to achieve our collective goals enshrined in our development agenda.”

She also said that the US is one of Gambia’s “good partners in development and the Gambia government is ever committed to its foreign policy to consolidate our bilateral and multilateral cooperation”.

“It is only collective action and partnership that can truly tackle these global issues. Most importantly, the Gambia government embraces partnership for these challenges.”

Keep it up Gambian children