As part of celebrations marking the Black History Month, which is celebrated annually to honour the contribution of the black peoples in America, the United States Embassy in Banjul over the weekend awarded at least eleven Gambian students, drawn from different senior secondary schools in the country, who took part in an essay competition.

The award ceremony, held at the US embassy premises, seeks among others, to reward students and their respective schools for their participation in the US National African-American history month essay competition.

Addressing the awardees, the US Ambassador to The Gambia Barry L. Wells said the competition seeks to motivate students to draw on their thoughts, analyse information and show their skills of written expression. As he put it, the process of analysing information is an essential part of academic maturity.

According to the US Chief Diplomat, the contest is not about the most eloquent, nor is it about grammatical perfection. "It is about the passion behind the words you have written and the clarity of your thoughts," he said.

Ambassador Wells added that "a large number of Gambians reside outside of the country. We found it compelling to begin a discussion on their role in shaping the future of The Gambia. The essays on this topic were both passionate and intriguing."

For him, he was not disappointed as all the essays reflected "thoughtfulness and feeling." He congratulated all the participants for the energy and thought they have put into their essays, while encouraging them to develop their written communication skills. This, he added, would serve them well throughout their lives.

For his part, a representative of the Ministry of Basic and Secondary Education, Mr. Ousman Ceesay urged the students to adapt a culture of writing and reading so as to broaden their educational horizon. The award, Ceesay added, shows how committed the US Embassy is in terms of educational development in The Gambia.

According to him, education is the key to any meaningful development, without which there cannot be any development. He challenged students to make the best use of resources at their disposal. 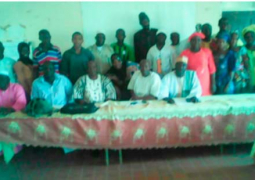 The CRC on track to deliver a draft constitution