The US Embassy in , in collaboration with the African Cashew Alliance ad hoc committee recently held a day meeting with the Gambia Cashew Farmers Association, at the Kairaba Beach Hotel in .

The meeting, among others, seeks to sensitise the cashew farmers, producers, buyers, traders, and processors to the African Alliance as an organisation and to highlight the possibility of The Gambia hosting the 2010 African Cashew Alliance conference in June.

It also aims to help cashew stakeholders' capitalisation on the sector’s potential for economic growth and employment.

Speaking at the meeting, the US Ambassador to The Gambia Barry Wells said over the past months, IRD had launched the United State Department of Agriculture funded Monetization project to help capacity building in the cashew sector.

According to US diplomat, over the past several months IRD has been training farmers with the goal of maximising the income and capacity of 50,000 cashew farmers and their families, indirectly benefiting an estimated 350,000 people.

According to him, fourteen African countries like , and ranks 4-6th biggest producers in the world. Wells noted that the ACA was founded by 20 private organisation in in 2005.

"It's mission is to increase the competitiveness of the African Cashew sector," he stated.

He stressed that by becoming a member of the ACA, The Gambia had moved one step closer to having a significant presence among the international community within the cashew sector.

For his part, Christian Dahm, Manager African Cashew Alliance based in also informed the meeting that is the biggest producer of raw cashew nut, noting that about 40% of world crop is grown here. 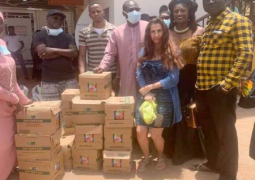