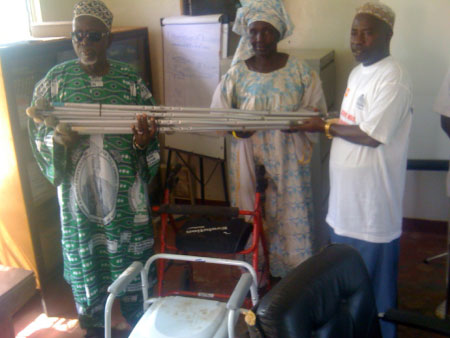 A Gambian based in the known as Boss Jammeh on Wednesday donated hospital materials to the Essau Major Health Centre in North Bank Region.

The donated items were presented to the health centre on behalf of the donor by one Ousman Sonko, a native of Essau.

The presentation was attended by the family members of Boss Jammeh, the chief of Essau, the village Alkali and the senior management of the Essau Health Centre. The donated items included wheelchairs, crutches and wickers.

Speaking at a brief presentation ceremony, the chief of the district, Fabakary Nana Sonko, described the gesture as “a very good initiative”.

He also advised the staff of the health centre to take good care of the donated items by ensuring they reach the rightful persons.

He noted that the donated items would go a long way in helping the community of Esau and thanked Ousman Sonko for doing the presentation on behalf of the donor.

The government alone cannot do it all thus the need for the contribution of philanthropists, he said.

Ousman Sonko, the man who presented the items for the donor, thanked Boss Jammeh for the confidence bestowed on him to hand over the items to the Essau Health centre.

He said he would continue to give encouragement to the Gambian youth based in the to contribute their quota to national development.

"Am Not Aware Any Political Problem in Marakisa Ward", Governor Sanneh