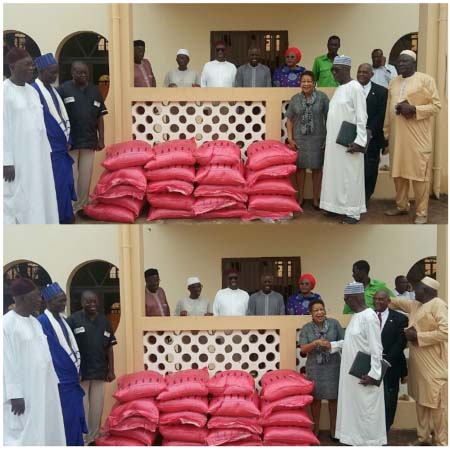 Ambassador of the United States of America to The Gambia has donated 20 bags of rice to Pipeline Mosque Foundation on Tuesday.

Ambassador Carolyn Patricia Alsup handed the food items while on a courtesy call to the Pipeline-based charity organisation.

The Pipeline Mosque Foundation is a charitable organisation based in Pipeline which provide help and assistance to the needy and most vulnerable people in the communities.

In an interview with reporters, the US Ambassador applauded the work being done by the foundation and reaffirmed her embassy’s readiness to support and find ways to work with the foundation in the fulfillment of its core objectives.

Ambassador Alsup stated that her visit to the mosque foundation was to emphasise the importance of religious tolerance “but The Gambia is known for this internationally and it is also embedded in the basic principles of the United States”.

The president of Pipeline Mosque Foundation, Alhaji Abu Dandeh Njie, said they have been distributing food items and other basic needs to areas as far as Bansang and Basse.

“We have also been involved in the building of schools and local madraasas. For example, Daddy Jobe Senior Secondary School was built by our foundation,” he explained.

“Every Ramadan, we offer free food to all Muslims irrespective of their sect or background to break their fast in the mosque here and during the upcoming feast of ‘Tobaski’ we are going to slaughter three bulls and the meat will be distributed in charity to the needy households.”

Mr Njie commended the US diplomatic mission to The Gambia for their support to alleviate poverty in The Gambia and called on others to follow suit.

Other speakers included the foundation’s welfare chairman Alhaji Mam Sait Njie, and chairman of the school board, Alhaji Abdou Njie.

Air of uncertainty continues to eat into the economy