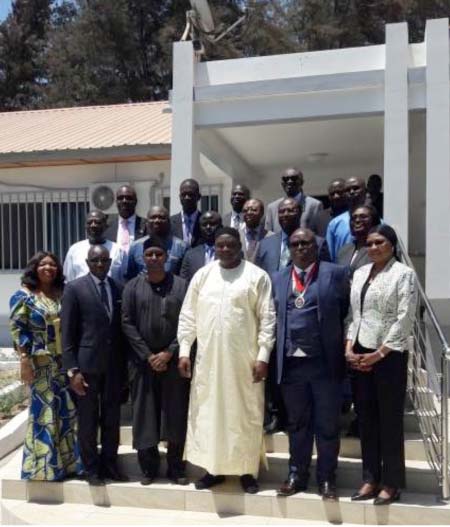 His Excellency, President Adama Barrow, has reiterated the need to sensitize Africans, Gambians in particular about the importance of insurance.

He made this remark during a courtesy call by Board members and Commissioners of the West African Insurance Companies Association WAICA at his Fajara office.

President Barrow noted that insurance should cover everyone and everything as is the practice in developed countries.

Citing the composition of the membership, President Barrow said he was impressed with what he described as “an African family in solidarity.”

He recalled how The Gambia benefited from such African solidarity during the political impasse after the 2016 Presidential elections.

The Gambian President said the New Gambia welcomes all and creates a new environment for people to invest.

He urged those in the Insurance sector to invest in The Gambia.

He observed the cross-generational membership of WAICA as a demonstration of seriousness to encourage the young ones.

Another observation of the membership was that the past presidents of WAICA members continue to serve in its board, and President Barrow concluded that “when appointed as President and you serve well you remain President”.

The current President of WAICA, Mr Rotimi Fashola, congratulated President Barrow and prayed for guidance in his engagements.

He noted that WAICA has come a long way and will continue to contribute to the Insurance sector education.

Mr Fashola said WAICA League focuses on insurance education to the grassroots to reach a large number of people to accept the insurance concept.

He argued that the Insurance sector contributes to employment creation and economic growth in The Gambia.

It was also noted that the Insurance regulators would work together to have laws that will guide the sector across the member countries.

In his introduction, the secretary general and spokesperson of WAICA, Mr William Coker, said the visit was part of the 39th anniversary celebration of their association and made an appeal for it to continue to let WAICA benefit from government subvention.

The delegation of 16 members from Nigeria, Liberia, Sierra Leone, Ghana and The Gambia was accompanied by the Gambian Minister of Interior, Hon. Mai Ahmad Fatty, who is overseeing the Ministry of Finance and Economic Affairs.