This is the 6th replenishment cycle to implement a project in climate change focal area.

The project seeks to personalise the sustainable energy for all (SE4ALL) action agenda, which was designed to establish a national platform to foster dialogue on energy related nexus issues.

It is also to promote the use of energy efficient appliances and also the quality assurance and enhancing capacities for market players and enablers.

Speaking at the opening ceremony held at the Kairaba Beach Hotel, Alois Mhlanga of UNIDO, said it was a great privilege for them to be the partner of choice of the government of The Gambia, through the Ministry of Petroleum and Energy and other stakeholders to deliver several projects promoting the use and integration of RE in productive sectors supported by GEF.

He explained that the validation was part of efforts under the UNIDO/GEF 4 project entitled ‘promoting renewable energy based mini grids for productive uses in rural areas’ to promote the scaling up of investment in renewable energy in The Gambia.

According to him, this was the last activities for the UNIDO/GEF 4 project, which has been highly successful.

He stated that the achievements of the GEF 4 project are testimony of the fact that when commitment, leadership and funding are available, projects that have a real impact across the country are possible.

Mr Mhlanga remarked that the renewable energy investment strategy for The Gambia builds on extensive analysis to identify the sectors with the highest market potential and livelihood of private sector investments as well as promising funding sources for the RE projects.

He expressed appreciation to the Ministry of Power and Energy for their leadership and support on the project and to ECREEE for developing the draft strategy.

On his part, Omar Bah, a representative from the National Environment Agency (NEA), said the main objective of the workshop was to gain support and commitment of the stakeholders in The Gambia on the adoption of renewable energy strategies.

He remarked that NEA in collaboration with stakeholders has over the years been implementing GEF funded projects in the area of renewable energy, climate change biodiversity and land degradation.

“Renewable energy resources appear to be the one of the most efficient and effective solutions,” he opined.

He acknowledged the support of national and international partners in the spirit of cooperation and commitment for working with The Gambia government in trying to meet their obligation towards mitigating effects of highly polluting energy sources such as the use of Heavy Fuel Oils (HFOs) in power generation.

Also speaking on the occasion, Momodou O. Njie, permanent secretary at the Ministry of Energy, said the availability of adequate, reliable, affordable and sustainable supply of energy in modern energy services was crucial for the socioeconomic development of the country.

He said the government over the years has been exploring ways and means to reduce the country’s high dependency on petroleum products for power generation.

He assured UNIDO/GEF and ECREEE of collaboration at all times and thanked them for the valuable support they have been giving to The Gambia.

“We assure them of The Gambia support and collaboration at all times and hope we continue to work together to tackle the challenges of access to modern energy services and climate change,” he added. 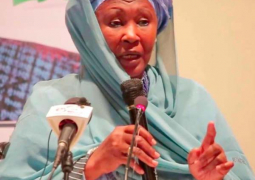