Unicorns made it to the final after defeating New Jeshwang United by a goal to nil in their semi-final encounter played at the Serrekunda West Mini-stadium.

Muhammed Camara scored the only goal of the game for Unicorns in the 47th minute of the game from a brilliant header after capitalizing on Modou Lamin Jah’s cross to slot home an easy header that proved to be the winning goal that earned his side a place in the final.

Kanifing United advanced to the final after hammering Old Jeshwang United by 3-1 in the semi-final game played at the Serrekunda West Mini-stadium.

Speaking to reporters after his side’s victory over New Jeshwang United, Dodou Kinteh, head coach of Unicorns, said they fought very hard for the victory, adding that derby games are never easy but they were able to contain their opponents.

“We play tactical and pressure football during training ground and that was what we imposed in the game,” he stated, adding that they suffered relegation in the Nawetan proper due to backing but do not deserve to be relegated.

“We do not fear any team in this zone because we are a big team,” he also said, adding that they would prepare very well for the final to win the trophy.

“It has been a long time without winning a trophy and if we do this time it will be a plus for the whole of ,” he concluded.

Dawda Gibba, head coach of New Jeshwang United, said guiding the team to the semi-final in his first year in charge as head coach was a good achievement for him, adding that he was proud of his players, who performed “very well” to reach this level of the competition.

“The players should have concentrated more for us to win the game,” he said, although they played very well during the game.

“In football everything is possible,” he remarked, adding that Unicorns won the game but were not a “better side”.

“It must be a difficult game because both teams are from the same area,” he said of the encounter while wishing his neighbours good luck in the final.

He also described his first year’s campaign with the team as fair for him as a coach, saying people who were watching his progress with the team are the right people to judge his work and not him. 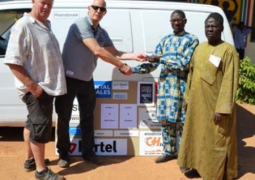