Ms. Sally Sadie Singateh, the communication specialist at UNICEF Banjul office has vowed that UNICEF will continue to support the government of The Gambia and partners.

Ms. Singateh was addressing a forum on Breastfeeding and the Private Sector as part of commemoration of World Breastfeeding Week.

She said the UN agency seeks to ensure that necessary policies and mechanisms are in place to promote optimal breastfeeding, as well as other heath, social, and economic issues for an accelerated child survival and development, and the attaiment of the MDGs.

World Breastfeeding Week is celebrated annually in the first week of August, but in The Gambia, the whole of August was set aside to celebrate the day.

Ms. Singateh said the private sector has been very supportive in complementing government and NGO efforts to attain the MDGs and other national goals with emphasis on reducing child and maternal mortality.

"I am without doubt that the private sector will positively embrace the promotion of exclusive breastfeeding in the work place as a further show of commitment towards national effort to bring the rate of infant death in the country down," she said.

According to her, during the past few weeks, several national activities were conducted around the country to raise awareness, as well as advocate for exclusive breastfeeding for the last six months in The Gambia. The importance and benefits of breast milk to the child cannot be over-emphasised, she added.

The UNICEF official said babies would also be less likely to become ill with preventable conditions, such as pneumonia, which accounts for 17% of child deaths globally, and diarrhoea, which is responsible for 16%.

"More significantly, studies have shown that breastfeeding improves physical and mental development in children," she said, adding that several studies conducted on children of various age groups have shown a great increase in intelligence in children who were breastfed, in comparison to those who were not breastfed.

She said the new Women's Bill passed in parliament this year calls for allocation of six months maternity leave to all working mothers. She called on companies to learn more about the law. She also urged them to go one step ahead by integrating breastfeeding promotion into the work place, including education for staff members and clients on the benefits of exclusive breastfeeding.

Speaking earlier was the Deputy Executive Director at the National Nutrition Agency (NaNA), Amat Bah, who underscored the significant role of the private sector in the promotion of breastfeeding.

He also spoke of the giant strides made by NaNa in the area of breastfeeding, adding that the theme for this year’s breastfeeding week is appropriate. 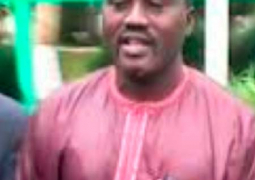