The Joint United Nations Programme on HIV/AIDS (UNAIDS) is winding-up operations in The Gambia as a result of financial constraints, officials have said.

Fifteen countries, including The Gambia the only one from the West African sub-region, will be affected by the move.

Speaking at a press conference held on Friday at GAMNASS office in Churchills Town, Musa Camara, national coordinator of GAMNASS, one of the partners of UNAIDS, said news of the closure of the UNAIDS country office came from its regional office in Senegal, and the reason behind the move is “financial constraints”.

Camara told journalists that UNAIDS is one of the oldest partners in the fight against HIV/AIDS in The Gambia, and stood by people living with HIV in communities through difficult times in the most dignified manner.

Describing UNAIDS’s coverage in terms of intervention as vast and comprehensive, Camara noted that UNAIDS is always ready to defend the rights of the people living with HIV nationally and internationally.

On behalf of the community of people living with HIV/AIDS, Camara appealed to the UNAIDS regional office through UN resident representative to kindly reverse its decision to close the local UNAIDS office.

‘We make this plea for the sake of humanity, and to prevent the future loss of many lives in the country due to stress, physiological problems and lack of proper support and care,’ he stated.

According to Camara, the gap resulting from UNAIDS’ departure would, no doubt, have an impact on the Gambian people. 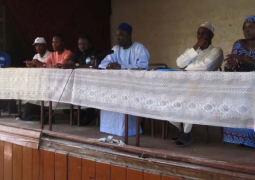