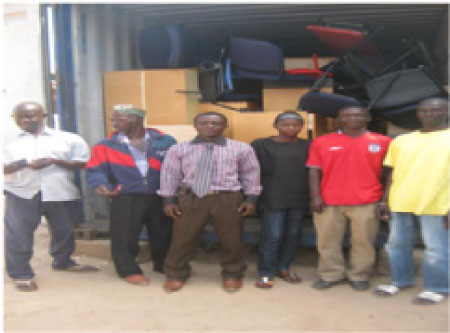 British couple Keith and Sheila, through South Land High School in the UK recently donated a 40-foot container, loaded with teaching and learning materials to the community of Bijilo.

The materials, which worth over half a million dalasi were distributed to Bijilo Lower Basic School, Bijilo Health Centre, Bijilo Nursery School, Heart lift and the community of Bijilo.

Speaking at the ceremony held at Bijilo Health Centre, Mr.Yayah T.K Sanyang, Head Master of Bijilo Lower Basic School, who doubles as the link coordinator of South Land High School, said as the headmaster he inherited the link, which he noted, has been in existence for the past nine years.

According to him, the link is complementing the efforts of The Gambia government in achieving MDGs and the Program for Accelerated Growth and Employment, PAGE.

He said the intervention is timely and will go a long way towards addressing the needs of students in the school.

While commending Keith and Sheila link coordinators of South Land High School in the UK for their humanitarian gesture, Mater Sanyang urged other philanthropists to emulate the gesture.

Mr. Assan Faal, the Chairman of Parent Teacher Association of Bijilo Lower Basic School, said the link between South Land High School in the UK and his school was initiated about nine years.

While highlighting some of the benefits derived from the link, through the coordination and supports of Keith and Sheila, such as renovation of class rooms, provision of electricity supply, building staff quarters and provision of clean drinking water, he cited the cordial relations between Bijilo Health Centre and health workers in the UK.

Mr. Baboucarr Jobe, Head Teacher of Bijilo Nursery School thanked the couple for the gesture and assured that the donated materials would be put to good use.

Noting that the couple have been very supportive of the community of Bijilo, not only in the provision of teaching and learning materials, he commended Keith and Sheila for the benevolent gesture. Mr. Jobe then assured the couple that the donated materials would be put to good use.

Ms Ramatoulie Ceesay, SEN midwife, who is in charge of Bijilo Health Centre, said “This is the second time the health centre is benefiting from such gesture.”

She reiterated that the donated materials would indeed complement government’s strive to provide affordable and efficient health services.

For his part, Elvis Choma, the Chairman of Heartlift Foundation, said the principal objective of the foundation is to reach out to the vulnerable, the excluded and the poor, particularly the children and youth within the district.

Drug Suspect to Return to Court