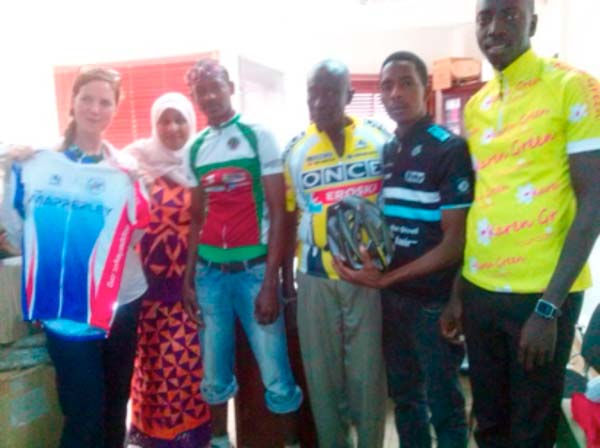 In his welcoming remarks Babucarr Jabai, secretary general of Gambia Cycling Association, described the day as special for them.

He said they usually have difficulties in raising funds for the association. He also expressed concern about the association’s lack of cycling safety gears, “which is why people do not give much attention to cycling”.

He stated that organizing cycling competitions needs a lot of finance, saying: “Cycling is not like football, where you pay and watch.”

Tessa Langley of Nottingham, the UK, a club member, explained that she is very passionate about cyclist and has over the years set up an African-based charity with some friends to support cycling in Africa.

She said that through their friendship with riders she become aware of cycling challenges in Africa and has since been making efforts to support those she could in Africa.

She further expressed hope this would motivate the cyclists to help them to ride their bikes.

Delivering the vote of thanks on the occasion, Edrisa ‘Chico’ Njie of the association expressed delight about receiving the items.

He on behalf of the association thanked the donors, saying: “The donation was timely and that the materials will be put into good use.”